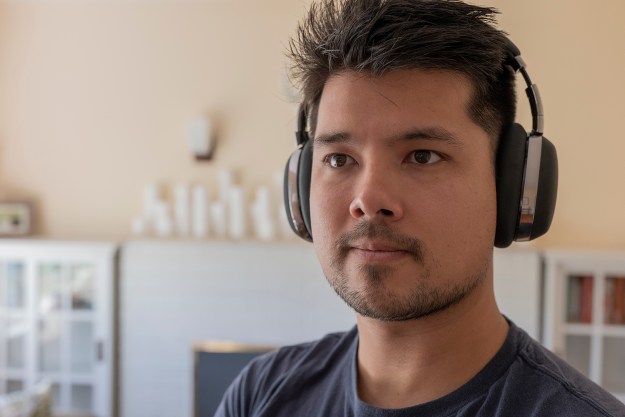 “Great sound, with the luxurious headphone experience you didn’t realize you wanted.”

Montblanc is not a brand I associate with audio equipment — it’s best-known for fountain pens and high-end watches. It wasn’t until I looked at its lineup that I realized the company expands beyond those two mainstays, so its set of luxury headphones isn’t as far off base as I thought.

Montblanc didn’t just slap their name on a pair of over-ears. They engineered them with Audeze’s founder, Alex Rosson. For those in the audio industry, that’s a powerhouse name that carries with it some serious expectations. With him at the design helm and their eye-popping $595 price tag, I had extremely high expectations for the Montblanc MB01 Active Noise Canceling Headphones.

Let’s see if they were met.

Montblanc is a luxury lifestyle brand. A considerable amount of its products’ appeal is going to come from the experience, and that is going to be an undertone to much of this review.

To start, much like opening a new Apple product, taking the MB01s out of the box is a clearly designed to be a pleasant affair. The box is made of heavy, sturdy cardboard. The headphones are nestled in an extruded plastic tub that is lined with a soft fabric and covered by foam under a cardboard insert. It’s full of pomp and circumstance.

As nice as the packing is, though, it’s not sustainable. Much of the packaging is not universally recyclable or compostable, which is something we frown upon.

The MB01s ship with an elegant soft case, a USB-A to USB-C charging cable, a 3.5mm jack to USB-C for listening to music wired, and an airplane audio adapter. Though the travel case is nice for a soft case, I wish that Montblanc had gone with a hard case instead. For headphones this expensive, I would have preferred a case that made me feel like they were more protected.

Also, I like that the airplane port adapter is included, but I would have preferred a 3.5mm to Bluetooth adapter instead, considering that airplanes these days more often than not are using a new entertainment console that doesn’t require that dual-prong adapter. And keeping these headphones wireless for as much of the time I wear them as possible feels like a better choice overall – especially considering their price.

It’s clear that Montblanc spared no expense with the construction and materials  here. The headbands and earcups are made of some of the softest and most supple leather I’ve ever touched, and nearly every other visible part is constructed from metal. Despite all that metal and leather, the headphones are surprisingly light both in hand and when worn.

These headphones are eye-catching in the simple, elegant manner of a classic car or a properly fitted suit. They beg attention, with their smooth flowing lines and bright chrome finishes. I even like how the cups are attached to the headband via a single contoured metal bracket, which breaks with the traditional half-circle bracket found on pretty much every other headset. The design matches the price.

The outside of the cups is a kind of rubber that grips easily in hand, and though it isn’t a material I normally associate with high quality, I must admit it looks great and feels nice to use. The pause/play/skip/skip back button, which Montblanc calls the Multifunction Button, is on the right earcup, and pressing that button is immensely satisfying. It’s just the right size, with just the right tactile feedback that makes it easy to use quickly, but hard to hit accidentally. Also, the response time is immediate.

Clearly, someone who wanted these to be fantastically functional headphones was in charge of design.

They didn’t get everything right, though. While the left earcup is devoid of any buttons, the right cup houses them all, and it gets a bit crowded. The topmost button calls Google Assistant (and only Google Assistant), the one below that cycles through the three active noise canceling options, below that is the volume toggle, and finally the power button sits at the bottom above the charging indicators and the USB-C port.

The volume buttons are too small for me to use effectively. Reaching behind the earcup to use them, I end up running my finger along all the buttons to make sure I’m touching the right one. The power button, which additionally acts as the Bluetooth pair button, is also curiously small, and made of plastic — unlike the others, which are metal-capped. That tiny button can be hard to hold down if you’re not looking at it, and I have small hands.

Overall, these buttons feel a bit like an afterthought when compared to the Multifunction Button, but that’s likely because the implementation of the latter is so close to perfect that it can be hard for anything else to measure up.

These are some of the most comfortable headphones I’ve ever worn.

As for the metal chrome finish I mentioned earlier, it is easily stained by fingerprints, so you’re going to want to keep a microfiber cloth on hand (Montblanc curiously did not include one) to shine them regularly.

Going back to that soft leather, wearing these headphones lives up to my high expectations: They feel fabulous. While I would not recommend working out in these, as I wouldn’t want to risk damaging the leather or finishes, I have confidence you could if you were so inclined. These aren’t going to fall off easily.

These are some of the most comfortable headphones I’ve ever worn. I have frequently forgotten that I was wearing them, allowing myself to just enjoy my music and focus on my work. Compared to the Sony WH-1000XM4, the MB01 generate significantly less wear fatigue.

The earcups of the Montblanc MB01 are remarkably softer than those on the WH-1000XM4, which are by no means uncomfortable headphones. When I get the perfect fit with the XM4s, it’s with a looser headband. Over time, those will slip a bit and force that headband onto my crown, which I notice and find unpleasant — most of the weight of the XM4s is held at one point at the top of my head.

The Montblanc MB01s have three main features outside of playing audio: Active noise cancellation, intelligent play/pause, and support for Google Assistant. The MB01s only support Google Assistant, so if you’re a fan of Apple’s Siri or Amazon’s Alexa, you’re out of luck. For me, dedicating an entire button to a smart assistant, like Montblanc has here, is a waste of a button, since I don’t use one. But if you’re particularly attached to yours, and it’s not Google, this might be a big disappointment.

Many high-end headphones can sense when you take them off and automatically pause (or automatically play music when you put them on). This is a feature I’m used to seeing in earbuds and was recently added to the Sony WH-1000XM4. Unfortunately, MB01’s version of this feature is disappointingly inconsistent and frustratingly unintelligent. Montblanc ships the MB01s with this feature off by default, and that was probably a smart idea. Often, music wouldn’t pause when I took the headphones off, but instead when I put them back on. It became so frustrating that I turned the feature back off.

Active noise cancellation is aided by the MB01s solid passive noise isolation. However, its active noise cancellation feature is just OK. When you have music playing, you definitely won’t notice any interloping sounds as interior volume and noise cancellation work together excellently. But alone, I could still clearly hear my air conditioner next to me, or the dump truck backing up on the next street over. It’s good enough for most, but not matching the industry-leading performance found in either the Sony WH-1000XM4s or the Bose Noise-Canceling Headphones 700.

Ambient sound mode is a decent experience, though the isolation the cups provide makes your voice sound a bit muffled when you’re making phone calls. You can clearly hear everything around you without it sounding artificially amplified, though.

The battery life is slated for 20 hours with ANC on, which is middling. The MB01s feature quick charge, which will net you 3 hours of listening time after 10 minutes of charging. As far as quick-charge features go, this is again middling — but it’s better than nothing.

At launch, the Montblanc MB01 did not have app support, but as of early September 2020, they did get it, along with a firmware update. I was very happy to get the app, which allows you to set a custom EQ. It’s not a perfect app and still a bit buggy, but I’m glad it’s available. You can’t adjust the strength of the noise canceling, but you can adjust the EQ away from the default, which I recommend.

Out of the box, I could tell that there is the capability for these headphones to sound fantastic. The sound profile of the MB01s is warm, approachable, and pleasant, but a bit weak in the lows. Things got better with app support: Boosting those lows had an immediate effect on how good the MB01s sound.

The default audio profile is very much mids-driven, with that narrow audio profile giving music a pleasant, warm sound that is easy to listen to. Bass won’t crowd your senses with too much boom, and those higher frequencies will never tug at your heartstrings with achingly high pitch. It’s pleasant enough, but not emotionally evocative.

Pushing the bass makes them sound far richer, but the treble gets out of control when changing the equalizer. Barely moving the EQ up makes the sound overly sharp. I ended up only adjusting the lows and left the highs at near-default levels, finding that mix to be my favorite.

Taylor Swift’s entire Folklore album sounds very good through the MB01s, if a bit tighter than on other sources on which I’ve listened. Hans Zimmer’s No Time for Caution comes through powerful and booming with the bass turned up, mirroring the first time I heard it in the theater. With the bass boosted, I can feel the headphones rumbling against the side of my head as the air moves around. As a bass head, I loved this.

The soundstage is a bit small on these, and they are not particularly detailed, but the MB01s make for fantastic easy listening.

If I had the MB01s, the Sony WH-1000XM4s, and the Bose Noise Canceling Headphones 700 on a table and was told I could only take one, I have to admit I’d probably grab the Montblanc MB01s. For me, I can see traveling with these headphones and never taking them off for an entire 15-hour day. They don’t sound quite as good as the XM4s (but are close) and they don’t cancel noise nearly as well as the Bose, but they’re so gosh-darn pleasant to use that I find myself gravitating to them day in and day out.

If your budget is $600 for over-ear headphones, the world is your oyster. The Sony WH-1000XM4s are the industry standard for sound quality, while the Bose Heaphones 700 are the best for noise cancellation. Both come in much cheaper, but if you are feeling particularly compelled by the styling and level of comfort provided by the Montblanc MB01s, you might have a harder time finding something that measures up.

These are, as I hope I’ve made clear, very well-built. They’re not only sturdy, but they’re made of excellent materials. The earcups are also replaceable, so that extends their life. You should expect several years of use, easily.

If you have the coin, yes. They sound pleasant and offer a level of comfort I’ve yet to find matched in any other set of headphones. Other headphones provide better features and more value, but Montblanc’s MB01 is a wonderful luxury alternative.