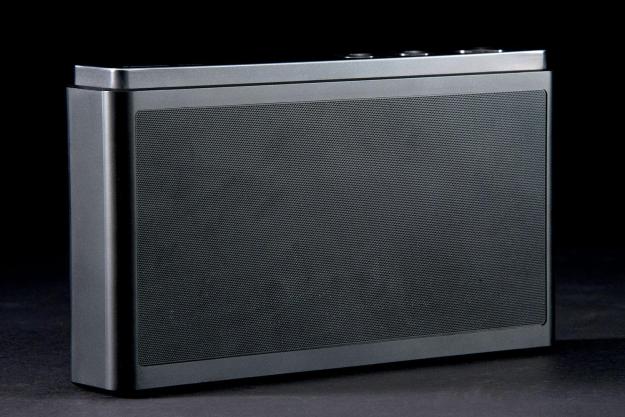 “The SC-NA30 makes a bid for big bass in a slim package, but overbearing distortion has us putting on the brakes.”

Electronics giant Panasonic has been quietly assembling a stable of Bluetooth speakers lately, all of which sport sleek, minimalist form factors with equally minimalist names like SC-NE5. Less-than-memorable monikers aside, the growing lineup exhibits Panasonic’s flair for creativity. For example, the NE5’s unique combination of a wireless speaker and a satellite CD player made for an enjoyable evaluation when we reviewed the system last year.

Unlike the homebound NE5, Panasonic’s latest is a succinct portable job called the SC-NA30 ($300). The NA30 offers a bounty of passive and active drivers, an impressively-long battery life, a good feature set, and a retro-futuristic design steeped in transistor radio nostalgia. Hoping to continue the good vibes leftover from our other Panasonic Bluetooth adventures, we recently brought the NA30 home to see what it could do.

Pulling the NA30 from its box revealed an elegant charcoal-colored casing with rounded corners and hard mesh speaker screens at the front and back. The unit is slim and relatively light, as if begging to be taken on the road. At the top rests a metallic panel with a sparkling set of silver dials sunken into it for treble, bass, and volume control.

We found an additional panel of controls in the form of three black keys aligned in a column along the right side. At the back of the speaker we discovered a small set of ports including a USB port for charging a mobile device, a 3.5mm Aux input, and a jack for the power supply. Three small rubber pads rest along the bottom of the speaker to help keep it in place on slick surfaces.

Searching through the box, we found a brief instruction manual, an A/C power adapter, and an IEC cable.

As mentioned, the NA30’s slim panel definitely stirs memories of old-school portable radios, minus the antenna and tuner, of course. Apart from that, the only factor that draws a major distinction between the NA30 and the older designs is the fact that the control knobs at the top barely extend from the panel, making accessing them unnecessarily difficult to use.

However, in what is perhaps its coolest design point, the speaker automatically slides its top panel down in a smooth robotic motion when it is powered on, unveiling the control dials in full. It’s a surprisingly appealing addition, and we actually found ourselves powering the speaker on and off a few times just to watch it go.

To power up the NA30, the user must press the top key on the right control panel, which elicits a pleasant tone. Beneath the power key is a multi-function button good for Bluetooth pairing, pause/play, and fielding phone calls over the system’s onboard speakerphone. We playfully hoped for a second that the unit’s final control key, labeled LP, might activate a preamp for a turntable. Instead, it simply puts the system into low power mode, which restricts the speaker’s top volume, and extends the NA30’s battery from its max 14 hours up to 20.

Each of the three control keys are accompanied by pinpoint LEDs, which glow red for low battery, blue when the speaker is paired via Bluetooth, and green when LP mode is engaged.

Panasonic doesn’t include specs detailing which Bluetooth profile the NA30 employs, but given the system’s extensive battery life, it’s probably safe to say it uses Bluetooth version 3.0 or higher. It also supports the aptX codec, which allows for CD-quality streaming with compatible devices. Other features for the speaker include NFC pairing with equipped devices, compatibility with Panasonic’s music streaming app, and a healthy dose of DSP, which incorporates Panasonic’s XBS Master bass enhancement.

By the numbers, the speaker weighs a tad over 2 lbs. and sits approximately 9.5-inches wide, 5.5-inches high, and just under 2-inches deep. Inside that small frame, the NA30 packs a respectable selection of drivers, including a pair of 2-inch midrange drivers, a 3 ⅛-inch “subwoofer”, and two 3 ⅛-inch rear-facing passive radiators. Total frequency response for the system is rated at 70Hz-16kHz. The amp delivers 20 watts of total power when plugged in, and 16 watts when on the go.

Unfortunately for us (and the NA30 we suppose) we began our listening session with what turned out to be the worst sounding track of our entire evaluation: “Before Your Very Eyes” by Atoms for Peace. While the speaker offers plenty of power for its size, the song pointed out a fatal flaw which would follow it throughout the session, namely a bloated, overpowering bass response. We’d wondered if that triple pack of 3-inch drivers between the sub and dual passive radiators might be a sign of things to come, and that turned out to be the case on several occasions.

The track in question begins with a big push from the kick drum that had the speaker immediately shifting atop the wooden table on which we’d set it up. The hit’s intonation was distinctly flat – more like someone beating on a cardboard box than a drum. And when the bass line kicked in, things turned into low-frequency pandemonium. We got better results by placing the speaker on a countertop, and after dialing the bass knob all the way down, the sound became more balanced. Still, we couldn’t seem to kill the distortion, which was reminiscent of a subwoofer buzzing the trunk of car that costs less than its stereo system.

… we couldn’t seem to kill the distortion, which was reminiscent of a subwoofer buzzing the trunk of car that costs less than its stereo system.

As we moved on, it was interesting to discover which tracks invoked the bass distortion, and which held balance in check, apparently based around a few rogue frequencies. Snoop Dog’s (Lion’s?) “Gz and Hustlas,” for instance, was clean and clear, and we even raised the bass level to midway to beef things up. Then, Radiohead’s “Fake Plastic” came on, and as soon as the bass line dropped in we were again served fat, overblown distortion, forcing us to turn the bass dial right back down again.

Apart from the unpredictable bass issues, the speaker also had a little trouble reproducing a natural, organic sound on some of the songs we auditioned, especially with guitar and percussion. The Beatles’ “Magical Mystery Tour” was extra tinny in the electric guitars and vocals at the entrance, and the drum kit seemed to have no room to resonate, as if packed into a tiny box. Staying consistent in its inconsistency, however, the NA30 pulled off acoustic instruments on select tracks fairly well, including a nicely rendered version of Neil Young’s “One of These Days.”

The best showing for the NA30 came on Depeche Mode’s “Sweetest Perfection.” The array of metallic synths and drum loops were very well carved, washed in rich, phase-y layers. Balance was excellent, and the climax of the track was clean, even displaying some decent stereo separation. Still, the rampant inconsistencies, and the recurring issue of that gravelly, overblown bass were too much for the speaker to overcome.

With retro-modern styling, a host of features, and a truly impressive battery life, Panasonic’s SC-NA30 definitely has some checks in the win column. But the speaker’s tendencies for bloated bass, inconsistent balance and an over-processed upper register have us looking elsewhere. Even if you love huge bass, the SC-NA30’s disappointing distortion is likely to dampen the party.

Instead, we recommend checking out the similarly-sized Braven 850 and 850S, as well as IK Multimedia’s iLoud. For a larger, solar-powered solution, seek out the Rukus XL. All of these options pump out good portable audio, without losing it in the low end.