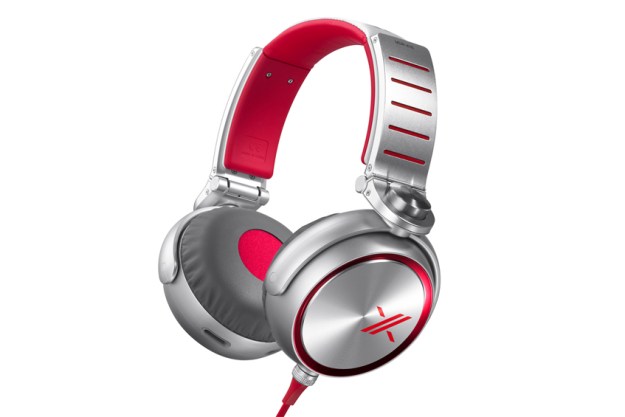 “Far from taking us to the studio, we felt The X’s presented a sound signature indicative of someone taking a hi-fi EQ and jacking up both extremes of the frequency spectrum.”

After pioneering the portable music revolution with its release of the Walkman in 1979, Sony held its crown as king of portable media players for decades. But the electronics goliath has found itself in unfamiliar territory over the past few years, watching its market-share cut into by a multitude of competitors.

Sony hopes to change at least some of that with its latest high-end offering to an exploding market of consumer and professional headphones, The Sony X. As we noted in our coverage of the Sony X’s release earlier this year, Sony brought in none other than American Idol and X-Factor star Simon Cowell as a celebrity endorser for its latest cans (hence the X). Back then, we talked about Mr. Cowell’s less-than-humble quote that, among other things, the Sony X headphones were, “…like being in the recording studio when the records are made.” We’ve been in a few studios and made a few records, so we were eager to see if this bold statement held any water. Here’s what we found.

At first glance, the Sony X package reminds us of something out of a sci-fi movie. The silver carrying case with bright red accents is reminiscent of a futuristic Nerf football. Unzipping the ultramodern pack gave us our first glance at the flashy new headset, folded like a collapsed robot waiting for command. In the pocket of the lid lay a selection of accessories including two red interchangeable ribbon-style cables, and a 24K ¼ inch jack.

The X’s circular over-the-ear earpieces positively gleam from a brushed silver finish with red accents (a black accented version is also available). Its spongy grey-and-red ear pads collapse in when placed on the ears like a giant air mattress. We liked the feel immediately as they sealed onto our ears — certainly different than anything we’ve previously tried on. The two cables included with the X’s are interchangeable with a convenient interlocking system, and the second cable includes a three-button iOS-mic system for controlling Apple products. Though we’re fans of the easily interchangeable ribbon-style cables, at only 4 feet long, they’re too short for audio professionals or DJ’s.

The rotating earpieces are fastened to thick plastic sliders, which secure them to a white-and-red padded headband stamped with Sony’s moniker in charcoal grey — the only design characteristic remotely reminiscent of traditional Sony products. In fact, take note: These ‘phones aren’t made for blending in while listening to music on the bus or at the office, they’re made to make a statement. If the X’s were a vehicle, they’d be a monster truck; maybe even a hovercraft. Clearly, these are marketed towards a younger audience which will likely dig the flamboyant styling.

After long wear, we found The Sony X’s were plenty comfortable on the ears, but less so on the top of the head. The ear pads felt luxurious as they pushed onto our lobes, and they provided a decent amount of noise isolation to boot. But over time we found them to too heavy for the amount of padding provided on the top band, frequently wishing there was another half-inch or so to ease the discomfort.

The Sony X will cost you about $300 dollars to bring home. You’d think a price like that would mean there’s some serious technology at work, but we’re not convinced that’s the case. What we found is that there are some, shall we say, complexities in the sound they deliver.

For our evaluation, we used an iPhone 3GS, a Macbook straight from the headphone jack, and a MOTU 896HD A/D Converter. The headphone’s drivers revealed the subtle differences in the direct output of our iPhone and Macbook and high-resolution converter. They were slightly more linear when plugged into our converter or the Macbook as compared to the iPhone. They also easily revealed differences in quality between CDs, high bit-rate MP3’s, and those encoded at a lower quality.

We tested several different types of music through the X’s and found their performance varied with each genre. With that said, we heard an obvious overarching sound design that made itself apparent the moment we began listening: wide and boomy bass upfront, low midrange power, and, at times, shrill, bright treble.

Upon first listening, we caught ourselves thinking it sounded as if there was a bass guitar solo on nearly every track – that’s not good, folks. This bass overkill was exposed with diverse styles of music , from Jay-Z to Peter Gabriel. When we listened to “Wouldn’t It Be Nice,” a favorite from the Beach Boys’ Pet Sounds, we found the high end was scratchy, bright, and unclear. When the bass track came in, it came on so strongly that it overshadowed the vocals. This was also true when we listened to Jamiroquai’s “High Times.” It started out well, the arpeggiating synthesizer panning beautifully from right-to-left, and the heavy-handed grand piano knocking ominously to start the groove … but then the bass came in. Goodbye clarity, hello bass. This was a common theme with many of the tracks we listened to.

Even in hip-hop tracks where you want that deep low-end like Jay-Z’s “Hard Knock Life,” the beat began with a genuinely pleasing fullness and the vocals were clear (if not a little sharp), but the bass line entered far too heavily. It’s not just too loud, it’s also too wide, covering a large spectrum from around 0HZ to 300Hz. The effect is a little like listening to music through your wall. Almost any time bass was placed in the center of the mix, the middle became crowded with all that low-end power. And even when the lows were less overstated, mid-range was underpowered, with loads of treble that was too piercing for our taste. That may be why we found a few older tunes much better listening then some of the modern tracks. It was more common to pan the bass left or right in the golden days of record production, and treble was way more low-key when laid down on those old tape machines.

On a more positive note, the X’s stereo width is huge, and hearing all the instruments spanning across that large space was really enjoyable. We also noticed here that the X’s can be very revealing when they aren’t busy assaulting bass, showcasing incredible detail. Another nice moment (to our surprise) was in John Denver’s “Sunshine On My Shoulders.” The stand-up bass on this track is very understated, so we were able to hear the brilliance of two acoustic guitars spread to each side in counter-melodies, and Johnny’s voice was bright and present. While we really dug how the Sony X’s treated this track, we have hard time imagining the sort of listeners interested in their grandiose style doing much John Denver listening. It’s just not a good match.

Far from taking us to the studio, we felt The X’s presented a sound signature indicative of someone taking a hi-fi EQ and jacking up both extremes of the frequency spectrum. It’s hard not to speculate that Sony had Beats by Dr. Dre in its crosshairs when it conceived these headphones. And for younger listeners with a desire for style and comfort and a serious appetite for heavy bass, these should certainly do the trick. But there are some more balanced and clear options available on the market, some of which can be had at a lower price. Consider the Beats By Dre Solo, or the Technics DH1250 instead, should you need something a little less heavy handed.