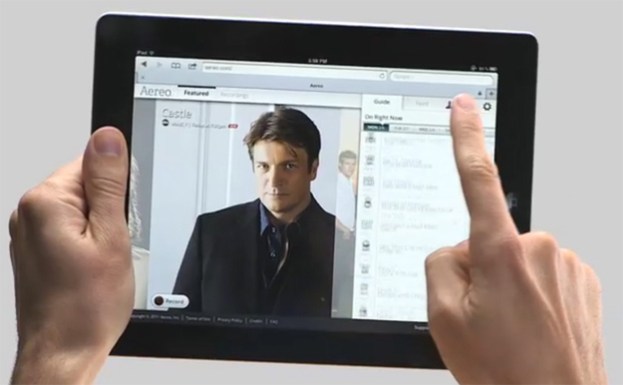 In a somewhat stunning legal decision, the Second Circuit Court of Appeals in New York gave web streaming company, Aereo, a legal victory today over 17 TV networks that have been looking to the court to shut the controversial service down. Currently available in New York City and surrounding areas within range of NYC broadcast TV antennas,  Aereo’s service allows users to stream live or recorded OTA (over the air) television broadcasts via the web.

The $12 a month service acts as a personal, cloud-based DVR, recording any OTA broadcasts that can be picked up in the New York City area. No hardware is required other than a computer, Roku box, or iOS device and Internet access. To sign up for Aereo, you must visit its website and request an invite, which usually takes a few days to receive.

Recently, Aereo expanded its reach into three new states and launched an ad campaign, despite its legal entanglements. Today, a story published in the Wall Street Journal indicates the maverick company is already in talks with DirecTV, Dish Network, and AT&T about expanding its service into other markets.

“Today’s decision from the Second Circuit Court of Appeals again validates that Aereo’s technology falls squarely within the law and that’s a great thing for consumers who want more choice and flexibility in how, when and where they can watch television,” said Chet Kanojia, Aereo CEO and Founder. “Today’s ruling to uphold Judge Nathan’s decision sends a powerful message that consumer access to free-to-air broadcast television is still meaningful in this country and that the promise and commitment made by the broadcasters to program in the public interest in exchange for the public’s spectrum, remains an important part of our American fabric.”

Kanojia continued, “We may be a small start-up, but we’ve always believed in standing up and fighting for our consumers. We are grateful for the court’s thoughtful analysis and decision and we look forward to continuing to build a successful business that puts consumers first.”

Apple AirPlay 2: Here’s everything you need to know
How much is Apple Music, and how can you get it for free?
Apple TV 4K vs. Roku Ultra: Which top streaming device is best?
This is the cheapest 50-inch 4K TV worth buying today (under $250)
The best TVs of 2022: our favorites from Samsung, LG, Sony, and more
These are the wireless earbuds I’m taking on a beach vacation
The best TV shows on Amazon Prime right now (December 2022)
Best new movies to stream on Netflix, Hulu, Prime, HBO, and more
The best noise-canceling headphones for 2022
The best new shows to stream on Netflix, Hulu, HBO, and more
The best wireless headphones for 2022: Which should you buy?
The best romantic comedies on Netflix (December 2022)
Best headphones for 2022: Sony, Bowers & Wilkins, and more