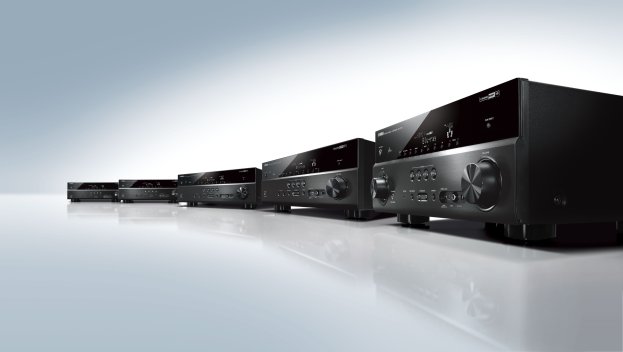 With all of the attention being paid to sound bars right now, one would think that AV receiver manufacturers would be a decidedly depressed bunch. At the CEA’s Pre-CES 2013 event held in New York prior to Black Friday, one of the categories singled out for declining sales were AV receivers. Part of the declining interest can be attributed to three years of economic recession and the inability of consumers to invest in a dedicated surround sound system, but the other part of the equation is that people simply don’t have the space – hence the strong interest in a one-box solution like a sound bar. The sound quality offered by sound bars has also improved and wireless 5.1 systems are starting to make their presence felt; MartinLogan’s MotionVision and the new Sonos PlayBar, for example, offer a dramatic step up. So what’s a manufacturer like Yamaha supposed to do in such an environment? Release an entirely new line of Yamaha RX-V AV receivers, of course.

The ugly truth is that you need a dedicated AV receiver and separate loudspeakers if you want a true 5.1 or 7.1 surround setup. The best sound bars do a good job reproducing the front three channels, and those with included subwoofers do a good job at producing the low frequency effects (LFE) embedded in movies, but they fail when it comes to the rear and side channels – that whole “surround sound” thing.

Yamaha is 125 years old this year and it has come a long way since its first organs in the late 1880s and hand-wound gramophone released in 1915. Over the years, Yamaha has done a good job producing quality AV receivers that offer reliability and performance at price levels that appeal to the vast majority of consumers. For 2013, Yamaha’s RX-V AV receiver series has five new models that offer support for 4K/Ultra HD, all of the relevant surround formats, and compatibility with Mobile High-Definition Link devices such as the new Streaming Stick from Roku and smartphones such as the Samsung Galaxy S III (although you need an adapter as the Samsung uses an 11-pin MicroUSB instead of the standard 5-pin).

The network-enabled receivers offer support for AirPlay, Pandora, and vTuner Internet radio and can be controlled using a free Yamaha AV Controller App  available for iOS, Android, and the Kindle Fire. You can stream media from smartphones and tablets to these models. All five models provide 4K/Ultra HD video pass-through and also offer an ARC (audio return channel) with 3D video pass-through. The RX-V775WA and RX-V675 will also upscale content to 4K/Ultra HD upscaling from both HDMI and analog sources – a great feature,  but we will reserve judgement on how well it does that until we get a chance to try one. All of the models with the exception of the RX-V375 have 5 HDMI 1.4 inputs; the entry-level model has four.

All models are equipped with Yamaha’s proprietary YPAO automatic room calibration and optimization system, which we’ve found has improved considerably since its early years. The flagship RX-V775WA model boasts 8-point multi-calibration capability, which is intended to improve audio performance by providing heightened listening experiences with a larger sweet spot to more seating positions within the room. All of the new Yamaha RX-V AV receivers are compatible with the iPhone, iPad, and iPod and will not only offer digital connectivity through the USB inputs on the front panel, but charge them as well. The network-enabled receivers can also playback audio from Internet radio and DLNA devices.

All of the receivers deliver between 90-115 watts per channel into five or seven channels, but the truth is that AV receivers tend to fudge the numbers in that department. You may get the quoted power in the front channels, but as you add more channels, there tends to be  a drop-off in power.

The two features that stand out on these models is the MHL-compatibility and the Burr-Brown 24/192 DACs that reside inside. The support for MHL means that you can plug MHL-enabled devices such as a smartphone or tablet into the receiver and transmit 1080p video and multi-channel audio through the receiver to your HDTV. MHL also allows you to control the device using the receiver/HDTV’s remote and, because it is powered up through the same cable, you won’t drain the battery of your device while sending all of those great family videos to your HDTV.

The 24/192 DACs not only do a great job with HD surround formats, but you can playback HD audio as well including FLAC files. Apparently, we’re not the only people who think there is a future for high definition audio.

The new RX-V Series models will be available at the following dates and prices: