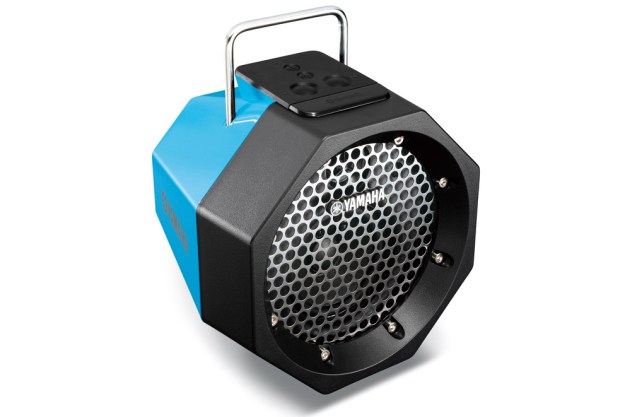 “We’re not going lambaste the PDX-B11 and slap it with the worst Bluetooth speaker rating ever, but we certainly can’t recommend it, either.”

Yamaha, purveyor of everything from motorcycles to grand pianos, has always had a firm footing in the audio industry. That’s why it was no surprise to us to find a Bluetooth speaker among the latest additions to its mammoth product line.

Dubbed the PDX-B11 (available at $150), the speaker strikes an original aesthetic with its tapered, octagonal design and rugged construction. However, it joins an aggressively expanding list of devices competing for your Bluetooth dollars. By the time you’re finished reading this, three Bluetooth speaker startups will have been created — OK, maybe we’re exaggerating, but not by much.

All of that competition means that even heavyweight conglomerates like Yamaha have to create serious value in order to make an impact in the wireless speaker arena. Since the PDX-B11 is one of the first Bluetooth speakers we’ve seen from Yamaha, we wondered if the device would have what it takes. After putting the speaker through its paces, here’s what we found.

The PDX-B11 reminds us of the sort of marine search light you’d expect to see the Gorton’s fisherman toting around. With its gleaming front screen and chrome wire handle, the speaker invoked visions of stormy tides and yellow raincoats. Inside the box we found only a small DC power cable, and some instructional material.

This B11 is a fairly lightweight speaker for its size, shrouded by a thick shell of rugged plastic. Though Yamaha’s website only offers the speaker in black and grey, it is also available in green, white, and dark blue at Amazon.

The PDX-B11’s wired handle arches above a small control panel which houses a selection of rubberized buttons for volume, power and Bluetooth pairing. At the front is a pair of LEDs that indicate power and Bluetooth connection, colored green and blue respectively.

The metal speaker screen adorning the front face is relatively thick and riveted to the frame at each of the housing’s 8 points. Under the screen sit the B11’s two drivers, consisting of a 4-inch “woofer”, and a 1 3/8-inch tweeter.

It was when music taxed the upper treble region that the PDX B11 revealed its weakest attribute.

This speaker lacks several options that we’ve come to take for granted in this product category. While many entry-level speakers we’ve seen include extras like a carrying case and a USB port for smartphone charging, the B11 offers no frills. At the back panel we found only two inputs: a DC power input, and a 3.5mm aux input. Aside from the meager selection, we wondered at Yamaha’s exclusion of a cable for its aux input — not exactly a budget-busting accessory.

Perhaps most troubling, though, was our discovery that the B11 doesn’t include a rechargeable battery. In the uber-competitive Bluetooth speaker market, a Lithium-Ion battery is standard fare, so finding slots for a 6-pack of AA batteries had us shaking our head. Maybe we’ve been a bit spoiled, but requiring disposable batteries (or expensive rechargeables) seems like a straight-up 20th century move.

Pairing the speaker was easily accomplished by pressing the pair button, and locating the device on our smartphone. In fact, the PDX-B11 ‘s Bluetooth connection was almost insidiously clingy. Even with the speaker turned off, we found our phone constantly connecting to it, as if communicating from beyond the grave. Like many wireless speakers, we also noticed a penchant for signal dropout once in a while. It wasn’t a frequent occurrence, but the connection was far from solid.

To evaluate the PDX-B11, we served up music using our iPhone 5.

We were generally satisfied with this speaker’s midrange response, anchored by the device’s capable 4 inch driver. The center and lower mids were pretty powerful on most of our test tracks, reproducing an impressive amount of sound. We found vocals to be notably clear and present in almost every genre. Snare and toms were often light, but were generally clean, revealing some nice stick work on rim shots. We also enjoyed electronic piano and synth patches, which had a crystalline clarity that was only slightly fragile.

Bass was rolled off pretty heavily at about 100 Hz — higher than some devices we’ve tested, but not out of the ordinary for smaller speakers. We heard a nice pulse in the lower mids on many tracks, but the low end was finicky. Once the speaker hit a certain line in the frequency spectrum, kick drums and bass lines could quickly go from thick hits to a boxy pop.

It was when music taxed the upper treble region that the PDX-B11 revealed its weakest attribute. Crash cymbals and tambourine were extremely sizzly on many songs. Treble was so hot and brittle, that we got tired of listening to the speaker in short order. Bright-sounding albums like Van Halen’s 1984 and lighter electric and acoustic guitar tracks often came through thin and tinny, as if they were being squished to fit through a tiny pinhole.

Some listeners may find the PDX-B11’s “clean and light” top end to their liking, but this speaker just isn’t our cup of tea, and not just because of its spitty treble. We’re still scratching our heads over the lack of a built-in rechargeable battery at this price point.

Still, the PDX-B11’s rugged design and punchy sound earns our respect as a potential portable for those who just need a speaker that can hang in rough environments and crank out some tunes. As such, we’re not going to lambaste this speaker and stick it with the worst Bluetooth speaker rating ever, but we certainly can’t recommend it.

For more options, check out our Bluetooth Speaker Round-up – or just look out your window. Bluetooth speakers are EVERYWHERE.