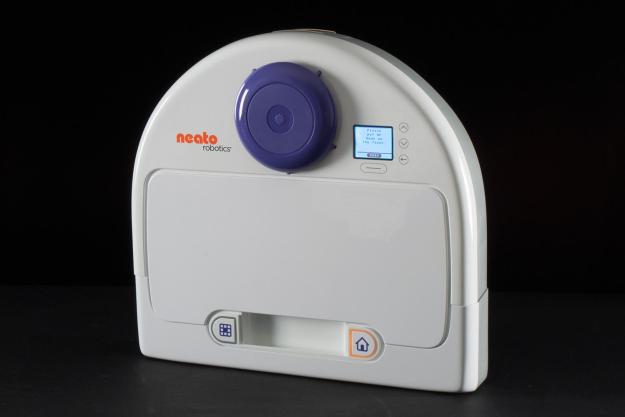 “One of the best robotic vacuums we've ever set loose on our floors.”

While both bots exist to serve the same purpose, a Neato and a Roomba are about as close to polar opposites as you can get. Where Roombas are round, Neato bots are square. Where Roombas are random, Neato’s robot vacuums are planned and methodical. But are they actually any better at cleaning your floor? We took Neato’s new BotVac 80 for a spin to find out.

Neato is about as simple to set up as any other bot we’ve tried. It seems that one-button out-of-the-box startup functionality is now the standard for robotic vacuum cleaners, and Neato continues this trend with the BotVac family. Once you’re all charged up, a single button press will initiate the BotVac 80 standard cleaning mode and send it scurrying around the room. If you’d like to set the bot on a recurring cleaning schedule, however, you’ll need to delve a bit deeper into the control interface. Luckily, navigating through the options on the built-in LCD and setting things like dates and cleaning times is a lot like using an old-school flip-phone. Using up and down buttons, you navigate through menu lists, pressing “enter” to go deeper or “previous” to go back . It’s not quite as slick and intuitive as a smartphone app, but it’s still pretty straightforward, and more user-friendly than a lot of other robot vacuums on the market right now. Even the most tech-challenged person you know would be able to figure this thing out in a few minutes.

Despite the simplicity, Neato fudged a bunch of little things that collectively make the otherwise stellar interface flawed. The touch-sensitive buttons, for instance, only respond to a very deliberate and well-placed touch, and aren’t particularly fast. Presses wont register if you miss the mark even by a millimeter, and can’t be executed in rapid succession. Slow and steady is the only way to win the race. Other little things — like the fact that you can’t manually adjust the time from AM to PM, and must instead roll the clock 12 hours up or down to change it — aren’t particularly annoying by themselves, but taken as a whole, they definitely detract from the user experience and make it feel clunky.

Thanks to its squarish edges, the BotVac 80 can easily reach corners.

The user interface could use a bit of polish, but the bot’s physical design makes up for it with ease. Unlike practically every other robotic vacuum, the BotVac 80 isn’t shaped like an oversized hockey puck — it has corners, which is a game-changer. For some reason, after Roomba hit the scene back in the early 2000s, every other robo-vacuum manufacturer that followed seemed to think round was the only acceptable shape for floor-cleaning robots. Except for Neato. Thanks to its squarish edges, the BotVac 80 can easily reach corners with its suction-backed brushroll, not just with little external sweeper feet like you’ll find on a Roomba. It might not sound like a big deal, but it makes a huge difference in cleaning performance. If there’s one reason you should get a Neato bot instead of another, it’s because of the shape.

The most impressive feature on the BotVac 80, however, is definitely its navigational abilities. Neato’s navigation software is based on a proprietary SLAM (Simultaneous Localization and Mapping) algorithm — the same technology used by Google’s self-driving cars. This software, in addition to a new laser scanner, allows the bot to continually scan a room and work out a methodical plan of attack on the fly, rather than bouncing around willy-nilly and cleaning your floors in a random pattern.

To test this badboy out, we ran it through the exact same testing gauntlet that we put iRobot’s Roomba 880 and Moneual Rydis H68 Pro through. Once we had it out of the box and charged up, we just pressed GO and let the bot run wild around the office for a while to assess it’s navigational abilities. We weren’t disappointed. In comparison to just about every other robotic vacuum we’ve ever tried, Neato’s bot is clearly a better navigator. It’s nimble, smart, can adapt to changes in its surroundings, and never once ran out of battery power before making it back to its charging station. The cleaning pattern was neither randomized like Roomba, nor a simple back-and-forth sweep like Moneual H68 — it was strange and unpredictable (see video), yet logical and extremely efficient. In all of our tests, it completed the job much faster than other robo-vacuums we’ve tried in the past.

But of course, navigational ability isn’t everything, and since we’re talking about a vacuum cleaner here, cleaning time isn’t nearly as important as cleaning performance. So, for the second part of the test, we brought the BotVac 80 into a smaller room to run it through some vacuuming trials. For this, we cleared out a room and gave it a twice-over with a traditional vacuum to ensure our testing area was sterile. After that, we pulled in some furniture and set up a few obstacles to simulate the layout of an average living space. Next, we whipped up a mixture of dirt, debris, and a bunch of other horrible stuff to sprinkle all over the floor. There was fine dust, coarse dirt, long hair, short hair, flat bits (oatmeal), chunky pieces (granola, cheerios), and even a couple Nerf darts just to keep things interesting.

Just like with previous tests, we measured out 70 grams of this filthy concoction and scattered it all over the room. Then, equipped with a full charge and an empty dustbin, we let the BotVac do its thing. When we came back to find the bot finished and docked at the charging station (about fifteen minutes later), we yanked out the dustbin and weighed its contents. The first trial yielded impressive results, with the bot picking up 66.2 grams of gunk. Not only is that slightly better than the top-of-the-line bots from iRobot and Moneual, but for what its worth, Neato’s bot also did it in a fraction of the time the other bots took. Subsequent trials weren’t quite as good, picking up 62.2 grams of gunk on the second trial, and a 63.5 on the third. On average, that gives Neato about the same overall cleaning performance as Moneual and Roomba, but it’s also worth noting that it did a considerably better job at reaching corners, didn’t get choked up with hair or Nerf darts, and never once got stuck.

Despite a few kinks in the user interface, the BotVac 80 is arguably one of the best robotic vacuum cleaners money can buy right now. Thanks to its unorthodox square-faced design and super-sophisticated navigation software, it can clean rooms faster and more thoroughly than any round bot we’ve ever encountered. Furthermore,  you won’t have to worry about this thing getting lost, dying before it reaches the charging dock, or getting choked up on hair or large chunks of debris. Once you’ve wrestled with the software interface and set the bot on a recurring cleaning schedule, you rarely have to interact with it ever again, save for periodically emptying its dustbin, which is rather large and shouldn’t need to be emptied all that often anyway. If you’re looking for a set-it-and-forget-it robot that can clean your carpet, this is the one you want.

Don’t only blame David Zaslav: Batgirl has always been treated like crap