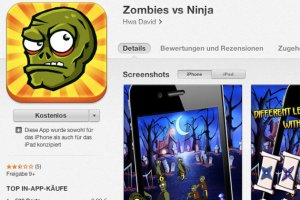 Remember how we recently reported on the lawsuit against Apple because of the former glitch that allowed for in-app purchases the first 10 minutes after purchasing an app, namely within games targeted toward kids? There were some pretty heavy damages done in those 10 minutes by some kids, the largest charge being $200.

That’s child’s play compared to the jaw-dropping $2,500 worth of in-app charges one five-year-old racked up in a mere 10 minutes, according to Business Insider. But these charges didn’t happen while the iOS glitch was in place. This happened well after. How?

His mother gave him her iTunes password so that he could download and play Zombies vs. Ninjas, a popular free game that appeals to kids. The damage came when the child found his way to the in-app store and, having the password, went crazy ordering add-on after add-on.

Add-ons for these types of games range anywhere from buying virtual currency (Real money for fake money…good deal!), giving characters special skills, granting access to special levels, and more. These add-ons can range anywhere from $1 to as much as $105. And before you know it, you’re $2,500 in the hole.

Moral of this particular story? Don’t give your iTunes password to your kids.

But, if you do want to pass along your password to your kids so they can quickly and easily download iOS games, we suggest you turn off the ability for them to make in-app purchases. Even if they go on an app downloading spree, they’re not likely to rack up such a high bill. So here’s how you do it:

Open your devices settings, select General, and then Restrictions. At the top, tap the Enable Restrictions button. From there, you’ll have to create a pin. Once you’ve done that, look for In app purchases and swipe to turn it off.

Easy peasy. But again, as we said, it’s best to just keep your iTunes password to yourself.