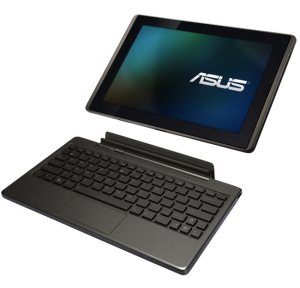 At the tail end of last month, a blink-and-you’ll-miss-it Best Buy listing appeared then disappeared for the Eee Pad Transformer tablet from ASUS. It U.S. release had been set for April, and now the Pad Transformer is here, and completely sold out at any major online retailer you can think of, including Amazon and Best Buy.

There are a couple of factors that make the Pad Transformer particularly noteworthy. The first is the fact that it is now the second tablet on the market that runs the tablet-focused Honeycomb 3.0 update for Android. The other feature that is arguably the most attractive is the device’s price point: you can get one of these puppies — assuming you can find it — for $399.99. With a set of features that rival or trump the iPad — the powerful NVIDIA 1 GHz Tegra 2 processor, twice the amount of RAM, a higher screen resolution, comparable battery life, microSD card slot, added USB ports and an SD card slot with the keyboard dock accessory, Flash support — the Pad Transformer effectively sets a new bar for tablet pricing.

It helps that reviews have been positive overall. Some take issue with the tablet’s design and the lack of a 3G-enabled model. It also seems that the video recording capabilities aren’t all they’re cracked up to be. There’s nothing really classifiable as a deal-breaker however, at least according to reviews.

It’s possible that ASUS simply made limited supplies available for the Pad Transformer’s initial U.S. launch, both to minimize risk and to generate hype by delivering a sellout product. Whatever the case, it’s working. People see headlines about the Pad Transformer selling out, they’ll then read that news and learn that there’s a feature-set here that trumps Apple‘s golden goose. Demand increases and suddenly the iPad has some serious competition to contend with.

Topics
Video-editing app LumaFusion to get a Galaxy Tab S8 launch
Apple Cyber Monday Deals: Apple Watch, AirPods, iPad, MacBook
Best Cyber Monday iPad Deals: iPad Air, iPad Pro, iPad Mini
Hive Social is my favorite Twitter alternative, but that’s not saying much
Don’t buy the wrong iPad during Cyber Monday — get this one instead
Don’t listen to billionaires like Elon Musk — app stores are fantastic
The best Samsung Galaxy S22 Ultra screen protectors for 2022
The most innovative tablets of 2022
Sunbird looks like the iMessage for Android app you’ve been waiting for
The most innovative smartphones of 2022
The most innovative smartwatches and wearables of 2022
These 6 things could make the Pixel 7a the perfect Google phone
Best Cyber Monday Tablet Deals: iPad, Amazon Fire, Samsung Galaxy Tab