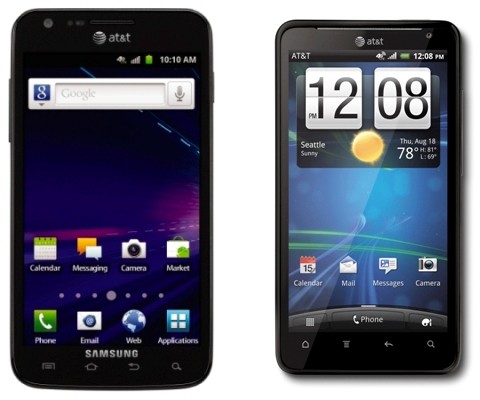 It looks as though AT&T found some monster phones for its first LTE handsets. In a press release this morning AT&T introduced the world to the HTC Vivid and the Samsung Galaxy S II Skyrocket. Both phones will be released on November 6, and in celebration of the new devices AT&T will also roll out its LTE service to four additional markets. Those markets include Boston, Washington D.C, Baltimore, and Atlanta.

We have been hearing rumors about the HTC Vivid for quite some time now, except it had a different name. First we heard it was called the Holiday, but no matter what you call it, this phone is packing some serious hardware. The Vivid will have a 4.5-inch qHD display, 1.2GHz dual core processor, and 8-megapixel camera. The Vivid will be available for $199.99 on contract, which oddly seems like a bargain for a high-end LTE device.

It is nice to see AT&T launching its LTE phone services with such strong devices. AT&T’s LTE network will be in nice cities on November 6, and there are plans to bring that total to 15 markets by the end of the year.