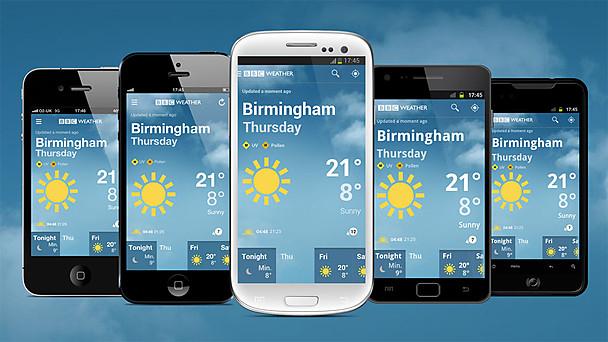 The BBC has been banging out weather reports ever since the corporation first hit the airwaves way back in the 1920s, though admittedly its forecasters have been known to get it horrendously wrong on occasion.

Almost 100 years later, with the rain still falling on the UK in buckets – with occasional sunny spells, of course – the BBC has just released a new standalone weather app for iOS and Android, one that could well prove a hit with smartphone owners in the famously climate-obsessed nation. The new smartphone software joins other BBC offerings such as its popular News and iPlayer app, we well as its recently launched Sport app.

The latest addition to its line-up is designed to offer a quick forecast for the day “at a glance”, with the option to drill down for further information, Liz Howell, the BBC’s head of weather, said in a post about the new software.

With its clean, simple interface, the main screen shows the weather conditions for the day, while a swipe to the left brings up an hour-by-hour breakdown for the next 48 hours (three-hourly for locations outside of the UK).

Tap on one of the hourly readings and you’re presented with a panel offering more detailed data on conditions, plus temperature highs and lows, UV readings and pollen count.

While the BBC’s mobile weather site shows the forecast for the next ten days, the app currently only offers a five-day forecast, something Howell said the team is working on extending.

The iOS and Android apps appear to be broadly similar in design and functionality, though the Android version offers an interactive homescreen widget as well as the chance to share favorite locations with a friend via NFC, provided of course both devices are equipped with the technology.

Having tried out the app, BBC technology correspondent Rory Cellan-Jones said in a tweet that everything about the app looked good, “apart from the forecast.”

With so many weather apps already available to smartphone users, the BBC will be hoping its high profile will help ensure its offering is a success. It certainly has some pretty stiff competition, with well-regarded alternatives like this one and this one already proving popular with users.