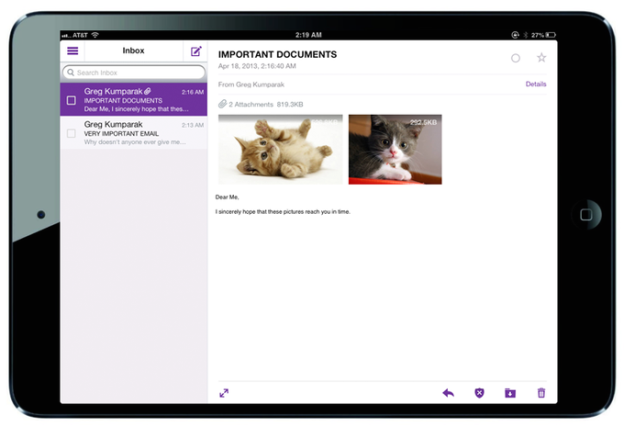 Not known for its command of style or design, Yahoo has been steadily revamping its image and is extending that simplified look to a handful of apps for iOS and Android.

We first saw a glimpse of Yahoo’s app design prowess when its stripped-down email client debuted on iOS, Android, Windows 8, and the web. Now, that same purple-centric, but admittedly appealing, Mail app has been optimized for the iPads and Android tablets out there.

At its core, Yahoo! Mail is very typically designed, with your inbox shown in a list to the left and the right-side being reserved for the selected messages. However, Yahoo has a few tricks up its sleeve with this one. Each email has a fullscreen button that, when tapped, removes all of the excess interface and presents you with a bare email. All you’ll see is the subject line, recipients, and the email itself. Common commands like reply, forward, trash, etc., fade into view with a simple tap of the screen. Swipe from the left or right to cycle through emails.

It doesn’t stop there though, hopping on the inbox zero bandwagon, Yahoo has included built-in tools to help you reach the that fabled stress-free place. When you’re going through your inbox, checking messages, deleting, archiving, and what not, you’ll notice the right side of the screen has started a running list of the emails you’re selecting. From there, you can perform one action on a specific group of emails (grouped by sender) or the entire selection. The app will even help you select every message from a certain sender automatically, like Twitter notifications for example.

So that’s the Mail app, but Yahoo’s released another beautiful app, and this one is meant to predict the weather. Yahoo has been powering iOS’ built-in Weather app from the very beginning, but today marks the first time Yahoo has stepped out on its own in the Weather department for iOS. The result? In a word: Flawless.

The homescreen couldn’t be more basic (in a good way), a picturesque photo of the city you’re in that reflects the current weather situation makes up the backdrop. Then in white text, you’ll see the current temperature, the day’s highs and lows, a quick description of the weather, and the local time. The photos are handled by Flickr’s Project Weather, a crowd-sourcing program launched last year.

Everything seems to be put together with the utmost care, Yahoo’s really nailed down the smaller details, from the spectacular photos to the blurred background when you drill down to the nitty-gritty. All the usual stuff is there as well, like forecast, precipitation reports, air pressure, wind speeds, etc. It’s a wonderfully clean, good looking Weather app, but the most notable aspect is that Yahoo made it! Bravo, guys. It looks like moving the mobile division to their own floor is paying off.

The Yahoo! Mail app is available now for iOS and Android and Yahoo! Weather is for iOS only.