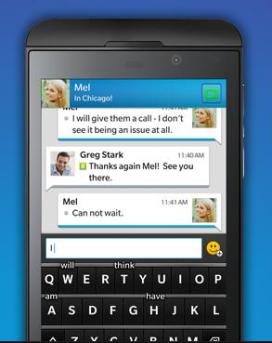 Last month BlackBerry boss Thorsten Heins said his firm was planning to bring its popular BlackBerry Messenger service to other platforms. Now it appears the Canadian mobile maker wants to get it preloaded on select Android smartphones, with BlackBerry chief operating officer Kristian Tear telling CNET this week that “there is interest from other handset makers”.

The executive declined to offer details on precisely which handset makers are interested in the idea.

According to Heins, BBM has 60 million active users around the world, with over 51 million of those using the messaging service at least once a day to send a colossal 10 billion messages. For handset makers without a messaging app among its pre-installed line-up of offerings, BBM could be just the ticket.

The news that BBM – one of BlackBerry’s more notable creations – is being prepped for iOS and Android was announced by CEO Thorsten Heins at a BlackBerry Live event in Orlando in May.

Bringing the service to other platforms will give BlackBerry owners the opportunity to use BBM to message friends with iOS and Android handsets, instead of just other BlackBerry users, though presumably something like the hugely popular WhatsApp messaging app has been taking care of any cross-platform communication for a while now.

The app should be appearing soon in both the iOS app store and Android’s Google Play store. There’s been no official word on a release date, though it was suggested this week that it could arrive as early as June 27. Of course, it all depends on if and when Apple and Google approve the software for their respective app stores.

Initially, BBM for iOS and Android is expected to feature BBM chats with one or more people, voice note sharing and access to BlackBerry Groups. BBM Voice and video chatting features, as well as access to BBM Channels, is expected to come later.

When asked if the mobile maker is worried that bringing the service to other platforms might cause some BlackBerry owners to dump their device in favor of a rival handset while holding onto their BBM account, Tear said, “We don’t feel like that is a risk,” adding, “Obviously, if we did, we might have acted differently.”