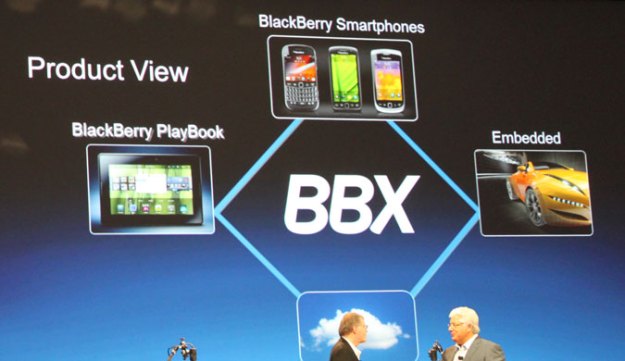 Just as Research In Motion (RIM) had finished dusting itself down following the damaging service outage last week which affected millions of its BlackBerry smartphone users around the world, another possible problem has come knocking at the door.

At its BlackBerry DevCon Americas gathering in San Francisco on Tuesday, the company proudly announced BBX, its next-generation operating system designed for use on all of its mobile devices. That seemed to go smoothly enough.

According to a Reuters report on Thursday, however, a company based in New Mexico has piped up with words to the effect of: “Hang on a minute, we’ve already trademarked BBx for one of our own computer products.” The company, Basis International, describes its own BBx (yes, the only difference is the size of the “x”)  product as “an OS-independent language, database, and toolset.”

The report says that the Albuquerque-based company has threatened legal action unless RIM refrains from using the name.

Basis chief executive Nico Spence told Reuters, “Our patent attorney has sent them a cease and desist letter, invoking the U.S. trademark act … requesting a response by October 31.” Spence said that if the letter has no effect, then Basis will take “the next logical legal step.”

Spence also said that his company has “thousands of product licenses installed worldwide with the ‘BBX’ prefix that run on Windows, Linux, Mac OS X, and other proprietary UNIX OSs.”

He even claimed that the company was dealing with numerous customer inquiries “voicing their confusion about the RIM announcement.”

You have to hand it to Spence though, in a statement outlining the company’s disquiet regarding RIM’s use of the disputed name, he also took the opportunity to push his own product, saying it could benefit the Canadian company. “Ironically, BASIS’ BBx may aid RIM in its quest to grab a share of the application market for mobile devices in that any application created with BASIS’ BBx for the Android or iOS mobile devices will also run on BlackBerry products,” he said.

A RIM spokesperson said that it hadn’t yet heard anything from Basis legal representatives. Even if the threat from Basis comes to nothing, this latest episode will likely come as something of an embarrassment for RIM, who must desperately be wanting to be seen to be doing something right after what has, up to now, been a rather unsettling year for the company.