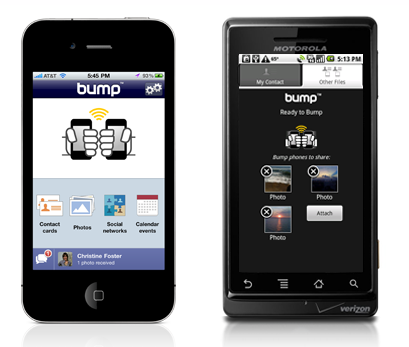 Bump Technologies, maker of an app that lets smartphone users swap information by bumping phones, has announced that it has closed a round of funding that saw the company raise $16 million in venture capital.

The Bump app launched in the iTunes App Store in 2009 as a way for iPhone users to exchange information, like names and numbers, without having to resort to the traditional business card swap. The Bump app has since appeared for Android devices.

Bump’s latest update sees the app extending into the social network realm. Android and iPhone users can now share photos, music, and locations and also add contacts to social networks — all through the physical “bump” gesture that has been the app’s signature from its inception.

No official word as to how Bump plans on using its newly acquired cash. One possibility is that the company will look into monetizing its app by partnering with businesses who could use the app’s location based network to offer customers discounts and coupons.

Bump claims that its app is currently used on 25 million Android and iOS devices. The Bump app is available for free in both the Android and iTunes app stores.

Video-editing app LumaFusion to get a Galaxy Tab S8 launch
My favorite phone of 2022 didn’t come out this year — it’s from 2021
It’s 2022, and customizing my iPhone is still horrible
Today’s best deals: TVs, laptops, iPads, robot vacuums and more
Update your Google Pixel 7 now for three big security and audio features
Samsung Galaxy S23: release date, specs, price, and all other rumors
4 tech collabs we want to see on the OnePlus Featuring co-creation platform
Save up to $350 on the Samsung Galaxy Z Fold 4, Z Flip 4
Forget Apple’s newest iPad — the Galaxy Tab S8 should be your next tablet
The iPhone 14 Pro’s Dynamic Island needs to get a lot more useful, fast
OnePlus 11’s controversial design returns in new ‘official’ renders
The Nothing Phone is finally coming to the U.S., and I can’t wait
Google Pixel 7a: release date, price, specs, and all other rumors