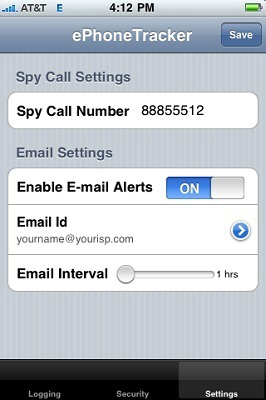 Businesses regularly monitor what websites their workers visit, or how many miles they put on the company car. And suspicious boyfriends and girlfriends often snoop through their significant others’ devices to catch cheaters red-handed. But a new program by Retina Software, ePhone Tracker, brings a new level of secret spying abilities straight to your smartphone.

From the official press release:

EPhoneTracker operates in total stealth mode and no mentions of the software are shown inside the phone. The hidden application runs in the background behind all other applications. After the software is set up on the phone, it silently records an entire array of activities and sends the details to the owner’s e-mail account, even if the phone’s histories are deleted…

The activity logs are sent to the owner’s e-mail account of their choosing, allowing them to view the results either from any computer or smartphone. The logs will display all of the information included in the text messages and call information in their entirety. Also recorded are GPS locations at a rate the user sets to view exactly where their smartphone is at any given time.

The software also downloads the infected smartphone’s complete contact list, and lets the ePhone Tracker administrator know anytime a new contact is added. Even emails sent from the tracked phone are recorded and sent via email.

This all sounds rather intrusive to us — and definitely not nearly as good as just being honest in the first place. But according to Gerald Carvey, Retina’s VP of Product Development, reality just isn’t as good as the optimists amongst us would like to believe.

“If you think your spouse is cheating, then statistics state you are probably correct,” said Carvey in a statement. “Cell phones are the primary communication tool for affairs. Our software allows you to expose the truth to see whether or not your suspicions are accurate.”