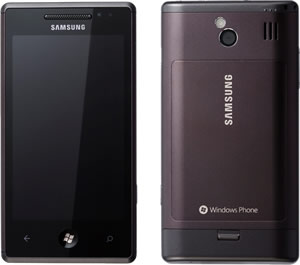 Windows Phone update is ‘bricking’ certain devices, reports WinRumors. Some users of Samsung’s Omnia 7 phone noticed that after the update their device no longer operates at all. The first Windows Phone 7 update was made available to all WP7 users on Monday. According to Microsoft, the update merely patched the updating process itself, making future updates smoother and easier.

“We have identified a technical issue with the Windows Phone update process that impacts a small number of phones,” said Microsoft in a statement. “We have temporarily taken down the latest software update for Samsung phones in order to correct the issue and as soon as possible will redistribute the update.”

The problem seems to have stemmed from those whose update failed during a point where the device can be manually restarted. For a the Samsung phones, this process can corrupt the firmware of the phone, rendering it inoperable. So what do users do if the latest Windows Phone update bricks their phone? Well, carrier customer service, it seems. Microsoft has not issued any official plan on how it intends to deal with those who lose their phones during the update process and it is unknown exactly how many owners have been affected or bricked at this point.

Have you experienced any problems with the first Windows Phone update? If so, Microsoft’s Twitter support team has been fairly responsive.

Topics
Video-editing app LumaFusion to get a Galaxy Tab S8 launch
The most innovative smartphones of 2022
The most innovative tablets of 2022
The best Samsung Galaxy S22 Ultra screen protectors for 2022
The Galaxy Z Flip 5 might fix the Flip 4’s biggest design flaws
Fitbit Cyber Monday Deals: Save on Sense 2, Charge 5, and Versa 2
Apple Cyber Monday Deals: Apple Watch, AirPods, iPad, MacBook
Get these JBL earbuds and 4 months of Music Unlimited for $25
OnePlus’ new Android update policy matches Samsung, shames Google
How Apple can fix iOS 16’s messy lock screen customization in iOS 17
The best voice-changing apps for Android and iOS
Spotify Wrapped 2022: what it is and how to view it
Save $225 on the unlocked Samsung Galaxy S22 Ultra with this deal