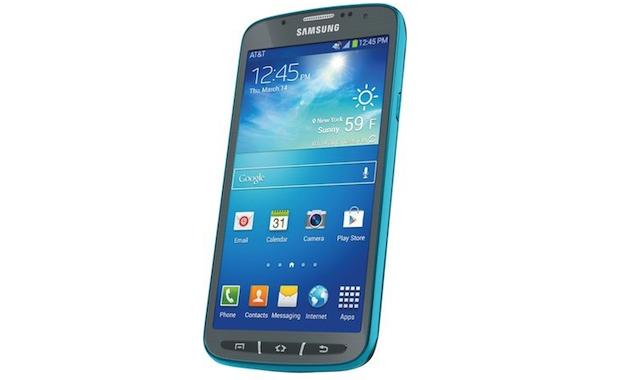 AT&T has gone Samsung crazy this week, and announced the forthcoming availability of the Galaxy S4 Active phone, and the Galaxy Note 8.0 tablet. It has even released teaser videos for each device to help entice buyers, which you can see below.

The Galaxy S4 Active is the newest of the two devices, and was announced just a few days ago, and we’re expecting to get a proper hands-on test of the phone at next week’s Samsung event in London. The phone is a variation on the Galaxy S4 flagship, but with the addition of IP67 certification so it can keep out the wet stuff.

It’ll be put up for pre-order on June 14 for $200 with a two-year contract, ready for release on June 21, and buyers will be able to choose between a blue or gray model. For this you get a 5-inch TFT screen with a 1080p resolution, a 1.9GHz quad-core processor, and an 8-megapixel camera with an Aqua Mode for taking pictures underwater.

Android 4.2 is its operating system, and there are various Samsung software features added to the TouchWiz user interface, plus 16GB of internal memory, a 2600mAh battery, Bluetooth 4.0, and a 2-megapixel forward-facing cam. AT&T has confirmed the S4 Active will connect to its 4G LTE network.

In addition to the Galaxy S4 Active, the Galaxy Note 8.0 tablet will be coming to AT&T soon. Announced during Mobile World Congress in February, the Galaxy Note 8.0 has, you’ve guessed it, an 8-inch screen. Its resolution is 1280 x 800 pixels, and the tablet comes equipped with the S Pen stylus, just like the Note 10.1 and the Note 2 smartphone/tablet hybrid. It runs Android 4.1, and is powered by a 1.6GHz quad-core processor, plus there is 16GB of storage space, and a 5-megapixel rear camera.

Again, the Galaxy Note 8.0 will connect to AT&T’s 4G LTE network, but no price or release date has been provided, with the press release saying only it’ll be coming in the next few weeks.

Video-editing app LumaFusion to get a Galaxy Tab S8 launch
Amazon’s new Fire HD 8 tablets run faster, last longer, and start at $100
How to use the Galaxy Z Fold 4’s massive screen without losing your mind
Best tablet deals for September 2022
iPhone Flip: what we know about Apple’s foldable plan
Does the iPhone 14 have a 120Hz display?
How to transfer WhatsApp messages from Android to iPhone
Best cheap Fitbit deals for September 2022
The Uber hack is an outrageous tale of a teen hacking for fun
The best Samsung Galaxy S22 screen protectors for 2022
LG’s doomed Rollable phone appears on video to show us what we missed
How to transfer your SIM and phone number to an iPhone 14
Samsung Galaxy S22 buying guide: everything you need to know