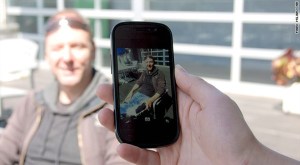 Getting a girl’s phone number could soon be as easy as snapping a picture of her face — as long as she agrees to it first, of course.

According to CNN, Google is currently working on a face recognition app for mobile devices that would allow users to access someone’s contact information simply by taking their picture.

That photo would then be used to identify other photographs of that person that connect to personal contact information.

While this may sound a little too much like the beginning of a dystopian future society where privacy has become entirely obsolete (or at least the start of an identity theft nightmare), fear not. Google’s engineering director for image-recognition detection Hartmut Neven says privacy is one of the company’s top concerns in the development of the app.

“We recognize that Google has to be extra careful when it comes to these [privacy] issues,” Neven told CNN in an interview.

The app will reportedly require people to check a box before Google would have permission to access their pictures and private contact information, which could include everything from name and email address to phone number, home address or a Facebook page.

Neven, whose company Neven Vision Google acquired in 2006, says that Google has long had the capabilities to provide a search engine that is based on images, rather than text. Concerns within the company about how such a service would be received by privacy advocates has kept Google from rushing to release facial recognition products.

The app would reportedly have similar functionality to Google Goggles, which provides users with information about a product by taking a picture of it. The service could also be closely linked to Google’s social networking endeavors, like the newly announced social-search tool, dubbed +1, which the company reveal this week.

It makes sense for Google to be cautious about privacy. Just this week the search giant agreed to regular independent privacy audits for the next 20 years in a settlement with the Federal Trade Commission. The settlement stemmed from an FTC investigation into whether Google’s Buzz social networking service violated users’ privacy by automatically revealing their user email contacts and correspondence.

A majority of people are “rightfully scared” of a technology that can reveal personal data through facial-recognition, admits Neven, “In particular, women say, ‘Oh my God. Imagine this guy takes a picture of me in a bar, and then he knows my address just because somewhere on the Web there is an association of my address with my photo.’ That’s a scary thought. So I think there is merit in finding a good route that makes the power of this technology available in a good way.”