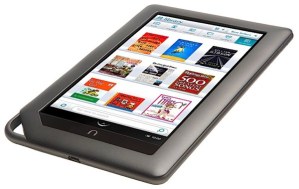 At the end of last week, a Home Shopping Network product listing for Barnes & Noble‘s e-reader, the Nook Color, revealed that a coming update would bring apps to the device via a Nook Store and Flash support. The listing was later edited to remove any specific mention of Flash, but that didn’t stop observers from hypothesizing that this meant the device would be getting a major update for its Android operating system.

The details of the upgrade, which is planned for mid-April, have now been confirmed by the television network in a product demo broadcast, Engadget reports. Flash is indeed coming to the device, along with an app store — Angry Birds is confirmed — and push e-mail, ushered along by an OS update to Android 2.2. HSN customers will apparently be first in line to receive the update, which presumably means that anyone who buys one there will receive their device with everything pre-installed. It should be noted, however, that the HSN price of $299.99 is $50 more than the B&N online and in-store price of $249.99.

What’s really noteworthy here is you’ve got this e-reader, which already trumps Amazon‘s Kindle with its color touchscreen and enhanced functionality, suddenly being upgraded to compete alongside the big fellas in the tablet PC market. The 3G-equipped Kindle has an edge over the Wi-Fi-only Nook in terms of Internet access, but a sizable portion of the tablet-consuming market is already perfectly satisfied going without 3G.

So basically, the Nook Color is being transformed into a 7-inch tablet via a software update. The $250 price tag makes it one of the cheapest options on the market for those who want to experience the joys of portable touchscreen computing. The 8 GB of storage space is small compared to the competition, but with a built-in SDHC slot and the availability of relatively cheap 32 GB cards, it would be easy enough to up that capacity considerably.