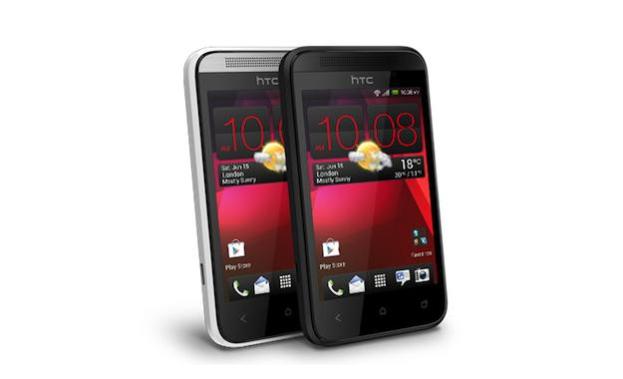 HTC has made a new phone official, but it’s not quite up there with the HTC One in terms of super high specs, and is instead a new entrant into the basic, low-cost smartphone market. The phone is the Desire 200, and its features suggest it could be the phone leaked as the HTC G2 back in February.

So, what’s it all about? The Desire 200 is about as simple as you want to get with a smartphone. The screen measures 3.5-inches and has a 480 x 320 pixel resolution, and is powered by a Snapdragon S1 processor, with a clock speed of 1GHz. There’s 512MB of RAM, 4GB of internal storage memory, plus a microSD card slot which can bump up the storage by 32GB.

On the rear of the 11.9mm thick chassis, there is a 5-megapixel camera which can also record VGA quality video, but does not possess a flash unit. HTC has added a selection of filters to apply to your photos, plus a one-touch share option too. At 100 grams, the Desire 200 is pleasingly lightweight, and also comes with Bluetooth 4.0, Wi-Fi, Beats Audio enhancements, and a 1230mAh battery.

Google Android is listed as the phone’s operating system, but HTC hasn’t stated which version is installed, however since it appears to use the HTC Sense 4+ user interface, we should expect either Android 4.0 Ice Cream Sandwich or Android 4.1 Jelly Bean. As far as connectivity goes, it supports various 2G and 3G bands, including HSPA data speeds.

In the official pictures, the Desire 200 looks sleek and stylish, just as you’d expect an HTC phone to be, which should help it win a few fans when it goes on sale. Exactly when this will be, how much it will cost, and where it will be sold is unknown, but we’ll update here as soon as HTC, or a local network, confirms the final details.