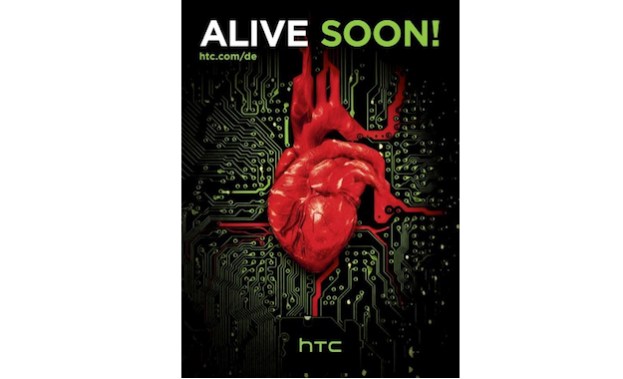 When it comes to teasing new products ahead of launch, there’s the LG way of doing things – a pretty package tied up with a bow – and there’s HTC’s way, which is a lot less family friendly. German mobile blog BestBoyz has received the teaser you see above, which shows an anatomically correct human heart fusing with a circuit board. Happy Valentine’s day.

The words, “Alive soon!” leave us with little doubt a new piece of hardware is about to arrive from HTC, although the link to the German portal of HTC’s site may indicate whatever it is will initially appear in Europe. The appearance of HTC’s graphic teaser comes just under two weeks before it’s big press event, where we’re expecting the M7 smartphone to be revealed.

So, is HTC referencing David Cronenberg in its imagery, with technology and soft, squidgy flesh merging in a gooey fashion? Probably not, and no matter how much as we’d like to see HTC’s interpretation of Barry Convex’s VR helmet from Videodrome, it’s more likely the firm is trying to convey the message its new device (or devices) will become one with its user in a far more normal way. It’s not the first company to take a more visceral approach to promoting how intuitive its products are either, as who can forget Sony Ericsson’s Xperia Play campaign, which managed to weave backstreet surgery and the black market for body parts into an ad for a mobile phone.

Back to HTC, where the rumors surrounding the M7 have been gathering for some time. It’s generally accepted that it’ll be this year’s flagship Android phone and have a 1080p resolution, 4.7-inch screen and a quad-core processor. Most likely, the teaser is hinting at HTC Sense 5.0, which could make its debut on the phone, and early images show it to have a minimalistic style. Earlier this week, a rumor emerged that HTC could be equipping the M7 with a PureView-challenging camera, the abilities of which would be described using Ultrapixels instead of megapixels.

HTC will be holding its special press event on February 19 in London and New York, where we expect our questions to be answered, perhaps followed by a chant of, “Long live the new flesh.”