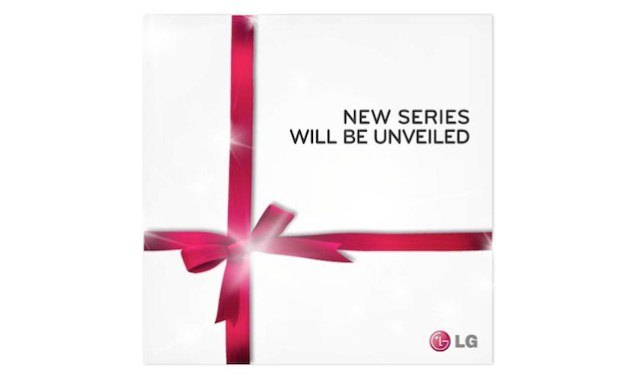 LG’s in a playful mood, as it put up an image on its Facebook page teasing the announcement of a new range of mobile phones. The picture shows a neat little red bow and the words, “New series will be unveiled,” but doesn’t add anything about when or where. The post also says, “See what surprise LG has in store for you this time, with an unexpected distinction.”

During its CES 2013 event, LG’s marketing boss said the firm was holding off announcing any smartphones until, “MWC next month,” then adding the releases would continue, “Throughout the year.” Since then it has announced the Optimus G Pro, a big-screen Full HD device headed for Japan, but has remained silent on its U.S. and European plans.

We’ve also heard rumors the follow-up to the Optimus G flagship Android phone, provisionally known as the Optimus G2, won’t be introduced anytime soon. The new phone is expected to be officially launched closer to its predecessor’s one-year anniversary, in the latter part of 2013. So, we’ve got a good idea of what not to expect, but what could be coming from LG?

It’s difficult to read too much into the use of the word, “Series,” as it could easily be interpreted to mean the first in a succession of new phones, or a complete new range of hardware. At Mobile World Congress last year, we saw the announcement of the L Series of fashion phones, a collection which has continued to grow with the introduction of the Optimus L9. This makes the lower-range L Series phones ripe for replacement. The promise of, “An unexpected distinction,” hints the new phones will have a surprising feature to make them standout. Quite what this will be is anyone’s guess, as there are many things we don’t expect – a phone with a built-in soap dispenser for example.

Finally, there’s also the chance whatever LG is so excited about won’t be unveiled at Mobile World Congress, but at a separate gathering. HTC is holding an event on February 19, presumably instead of making a big deal at MWC, while Samsung may also be planning a quiet show, although this is still unconfirmed.

UPDATE 6:30AM 02/07/13: LG has released a short video to accompany the still picture you see above. Entitled MWC 2013 Trailer, it doesn’t have much else to add except to say a, “Breakthrough will be made at MWC 2013,” and that whatever is coming will be Premium, Speedy, Stylish, and Creative. You know, all those things marketing folk like to write in press releases. You can see the video below, and don’t worry about the suspicious flashes part way through, as a frame-by-frame analysis didn’t reveal any hidden secrets.