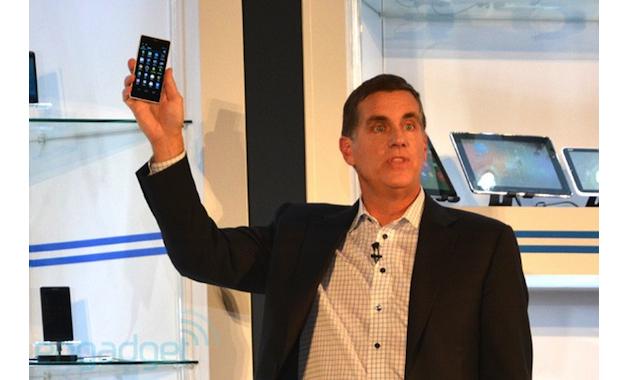 The bulk of Intel’s Computex 2013 keynote presentation may have been about the new Haswell processor, and its presence in tablet/laptop (Taptop? Lablet?) two-in-one devices, but VP for Sales and Marketing Tom Kilroy also talked briefly about the company’s mobile plans. Specifically, he introduced a reference design smartphone running the new Merrifield mobile processor.

Merrifield is the successor to the Medfield and Clover Trail+ chips currently used in Intel’s smartphones, and is designed to take on the might of the latest ARM-based chips found in the majority of phones around the world. Kilroy claimed the Merrifield chip will offer a 50 percent performance improvement over the current generation mobile Atom chips, and would use four times less energy too.

The Merrifield reference design phone Kilroy pulled from his pocket is coming out next year, and he promised we would see the first examples at Mobile World Congress 2014. Intel found several buyers for its Medfield reference phone, including Indian manufacturer Lava, and the UK network Orange, so its reasonable to expect the Merrifield device to be snapped up by someone prior to the show.

However, there is still a question mark over when Intel smartphones will incorporate 4G LTE connectivity. Kilroy admitted, during a Q&A session after the presentation, that not having 4G LTE was the reason Intel phones weren’t making any headway in the U.S., as carriers aren’t particularly interested in stocking them without it. Intel does have plans to bring 4G LTE to its tablets, which it will do by using the new 22nm Bay Trail-T chips, based on the Silvermont architecture, which will be out by the end of this year.

As Merrifield chips are also built on Silvermont architecture, perhaps it won’t be long until 4G LTE comes to Intel-powered phones, although it wasn’t clear if the 4G radio would be integrated into the Bay Trail-T, or if it would be separate – the latter of which being almost essential if it’s to be used in a phone. Sadly, no further information was shared on Intel’s 4G mobile plans, so it looks like we’ll have to wait until MWC next year for more details.