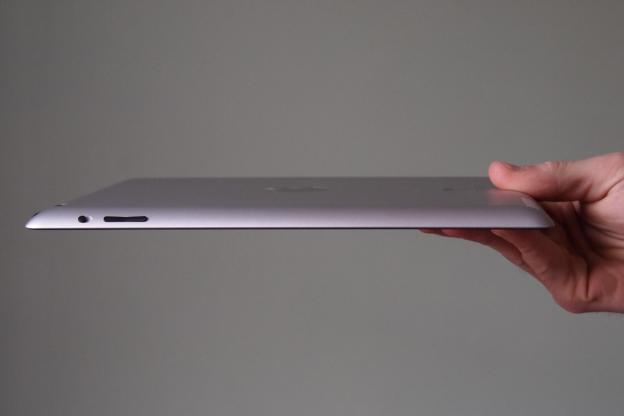 If the lack of a thinner and lighter iPad is something that’s been keeping you awake at night, then a DigiTimes report on Monday will ensure you rest a little more easily this evening.

The 9.7-inch iPad 5, which is expected to launch later this year, “is estimated to be 25 to 33 percent lighter than the 4th-generation one”, sources in the supply chain told Taiwan-based tech publication DigiTimes.

The new slimmed down and lighter tablet has been made possible with the use of thinner glass for its touchscreen display as well as backlighting using a single LED light bar instead of the two LED light bars present in the current iPad, the report said.

Of course, many of you will be aware that the iPad 2 was both thinner and lighter than the iPad 3 and 4 models which followed it. The extra bulk was largely the consequence of Apple introducing its high-definition Retina display to the device, with all indications now suggesting the tech giant has found a way to get its tablet back down to size.

LG Display, Samsung Display and Sharp are expected to supply the display panels for the iPad 5, with production of the tablet believed to begin in July. Shipments of between two and three million devices are forecast for September, shortly before the tablet’s expected launch, DigiTimes said.

This latest report backs up claims from KGI Securities analyst Ming-Chi Kuo – a man who’s called it right with Apple products in the past – who last month said the next-generation iPad would be around 7.5mm to 8mm thick – the current model has a thickness of 9.4mm.

Of course, Apple will always be hunting for ways to slim down and lighten its tablet and other products; it’s just a matter of how long it takes to discover or create the technology in order to make it possible. With this latest report, it seems the iPad 5 is all set to shed the extra weight and thickness introduced with the third- and fourth-generation models, a subtle design change the Cupertino company hopes will help to continue to drive sales of its big-selling tablet.

Video-editing app LumaFusion to get a Galaxy Tab S8 launch
What to expect from Google’s October 6 event: Pixel 7, Pixel Watch, and more
Razer’s 5G-enabled handheld gaming system is getting a public release
How to reset Apple AirPods and AirPods Pro
The best tablets for kids in 2022: Fire HD, iPads, and more
How to change the time font on your iOS 16 lock screen
How to use iOS 16 photo cutout to cut and paste images
The best selfie apps for iOS and Android
Experts say the iPhone 14’s satellite feature may have a dangerous side effect
How the Galaxy Z Flip 4 fixed my unhealthy phone habits
iOS 16’s biggest Apple Pay feature might be delayed until 2023
Best iPhone deals and sales for September 2022
Huawei’s Mate 50 Pro is here with an insane 200x zoom