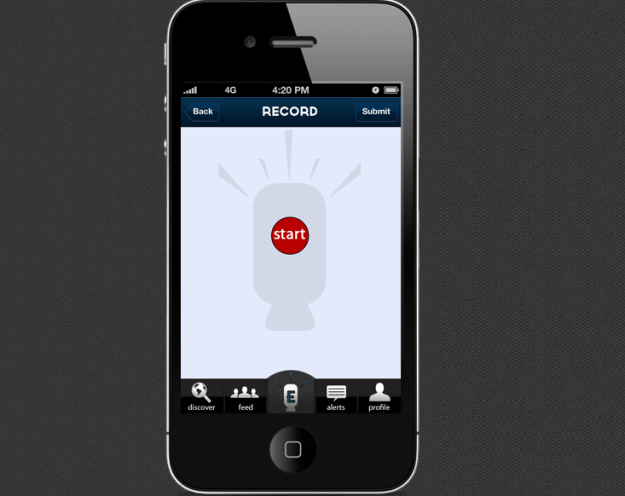 While hardware stole the show at SXSW this year, there was still plenty of buzz from new apps that managed to corner significant attention – including upcoming launch Eevzdrop (as in, “eavesdrop”). The app has – willingly or not – already become known as the “Instagram for sound” during the last few, hazy days of SXSW Interactive Week.

Not without reason, either. Eevzdrop, which has yet to launch, but is currently enjoyed by some odd 20 beta testers, allows you to record up to 10 minutes of audio and share it out in a variety of ways (email, to the stream, or even upload directly to your site or blog). You can also pair it with a photo, creating a multi-dimensional digital experience. Geotagging is also available.

“We want to keep things super simple at first,” says cofounder Rommel Paraiso. “Originally we were working on a fashion app, but then we were messing around with doing sports commentating – we’d record on our laptops and then add commentary. We thought it’d be cool if our friends could hear us instead of the TV announcers. And it went from that to, wondering what people would do with this type of app – would they talk or would they listen?”

Paraiso, who has a background in sports (he’s a producer for the Chicago Bears), took the commentator view of creating the app. Co-founder Chachi Sabate, who’s worked in the music industry and with music bloggers, saw it as an opportuntity for writers to get quick bits up and running fast and easy.

The team knew that SXSW would be the place to create buzz.

“SXSW is the first thing we thought of,” says Paraiso. “With music and interactive, it was the right space.” Even so, the team originally planned a soft App Store launch followed by PR build up. But the press had other ideas, and when Eevzdrop became an “app to watch for at SXSW,” the team decided to roll with the punches and bring whatever they could the show (which, for the record, is mostly merch, hands-on demos, and good will).

The lack of a launch isn’t due to any problems with preparation. “We could release the app now,” says Sabate. “It’s been approved by the App Store. but we want to make sure all of the features are quality, and make sure the functionality of the app is perfect.”

So far, so good? In our brief moments getting a look at Eevzdrop, everything worked as promised. It’s quick and easy to record and upload audio, picture-taking worked seamlessly, and the social feed loaded fast, even under the strain that is using public Wi-Fi at SXSW.

Despite the early hype and promising first look, the “Instagram for [insert anything here]” market is in danger of being played out. So how will Eevzdrop avoid becoming just another social app in a very flooded App Store? One thing the team has on its side is that Eevzdrop isn’t just a social feed; there is a very real utility to the app. If you’ve ever limited yourself to the native Voice Memo iPhone app, you know that organizing your sound bytes is a pain and retrieving that content can take forever if you’re trying to email it out and it’s longer than three or four minutes.

Really, Eevzdrop is simply pinpointing a type of media we can create, audio, plus a quick visual (if you want) – and scaling the back end so that this is done well. “Compressing audio down was some work,” says Paraiso. “But it’s not as bad as video.”

Really, sound is sort of the final social frontier: We have more photos apps than we know what to do with and video sharing apps are cluttered, but audio has yet to be explored. And while sound feels like a very personal approach to social media, take a look at the current app explosion: Extremely personal apps like Snapchat and WhatsApp have been raising stars of the sharing and social scene.

At the moment, the team plans to enjoy the SXSW hype hangover, and isn’t currently raising. Eevzdrop should hit the App Store soon, and in the meantime its team will prepare for launch and work out the final kinks.