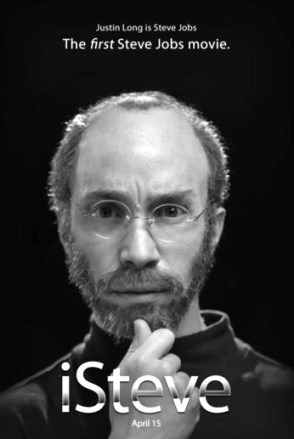 Comedy website Funny or Die has turned to the life of Steve Jobs for its most ambitious project to date.

With the suitable cheesy name of iSteve, the 60- to 75-minute spoof takes a humorous look at the life of the late Apple co-founder, and is described by its maker as a biopic poking fun at biopics.

The starring role is played by Justin Long – who, incidentally, played Mac in a series of Mac vs. PC commercials that aired a few years back – with James Urbaniak taking on the role of Bill Gates, Michaela Watkins playing Melinda Gates, and Jorge Garcia as Steve Wozniak.

Speaking to the New York Times about the project, iSteve writer and director Ryan Perez said, “In true Internet fashion, it’s not based on very thorough research — essentially a cursory look at the Steve Jobs Wikipedia page.”

He promised that it would be a “very silly” look at Jobs’ whole life.

At over an hour, the movie will be Funny or Die’s longest production to date, with most of the site’s content comprising much shorter comedy skits. Still, Perez evidently didn’t waste too much time wrapping this particular project, taking just three days to hammer out the 81-page script, and five days to film it.

The writer-director admitted that his effort “might not be the best”, but added that he was happy for it to be the first.

iSteve will be released online on April 15, which would have been four days ahead of the release of Ashton Kutcher’s jOBS movie until the producers pushed it back, saying they needed more time to sort out a marketing campaign for the film.

Another Jobs biopic – written by The Social Network writer Aaron Sorkin – is also in the works, though up to now no firm release date has been set.