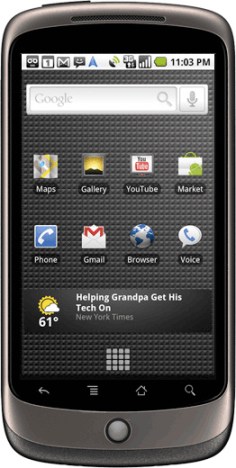 Many people consider the iPhone the ultimate “smart” phone. Now Google wants you to think of its new Nexus One device as a “super” phone. The Nexus One offers a sleek handset, the latest version of Google Inc.’s easy-to-use Android operating software and compelling features such as voice recognition technology for speaking e-mails and tweets.

Yet, it’s not as super duper as it could be.

Google is selling the Nexus One directly to consumers for $529. The phone’s unlocked to support multiple phone networks, but the current version is only compatible with GSM wireless technology. That limits the device in the United States to T-Mobile or AT&T — and only T-Mobile if you want high-speed Web surfing. You can also buy the Nexus One for $179 with a two-year service contract with T-Mobile.

On the surface, the phone looks sturdy and, with a thickness of 0.45 inch and a weight of 4.6 ounces, is slightly slimmer and lighter than the iPhone.

Made by Taiwan’s HTC Corp., which also put together the first Android phone back in 2008, the Nexus One has a crisp, responsive, 3.7-inch touch screen.

It replaces most physical buttons found on other phones with a row of touch-sensitive keys that perform such tasks as pulling up the menu, taking you to the home screen and conducting searches.

There’s also a clickable trackball as you’d find on a BlackBerry — a convenient navigational tool, though it looks almost retro on the slick handset.

Under the hood, the Nexus One runs the Android 2.1 operating system, also known as Eclair. This is a slight upgrade over what’s on another recent high-profile Android phone, Motorola’s Droid. Like previous editions of Android, Eclair is responsive, easy to navigate and includes an on-screen keyboard (Unlike the Droid, the Nexus One has no physical keyboard). It keeps the cool turn-by-turn GPS navigation feature introduced with the Droid, and adds some new tricks, too.

There are some visual updates: The Nexus One has five home screens, which is at least two more than most phones. You can scroll through them one by one by swiping a finger, and unlike most phones, you can also use little dots at the bottom of the screen to jump from one to the next in line. Pressing on the dots pulls up a mini view of all five screens, and you can select one.

You have a choice of animated wallpapers to set as the phone’s background, including one that shows grass swaying softly on the screen.

The coolest update is the expansion of Android’s voice recognition capabilities so you can dictate Facebook status updates, Twitter posts, e-mails, texts and instant messages.

I quickly found myself speaking my side of instant-messaging conversations with my mom and dictating my responses to friends’ e-mails. Sometimes I used a combination of the two to communicate with friends and family.

There are some drawbacks to all this vocalizing, though. I quickly realized the Nexus One didn’t really understand punctuation, so it was easiest to speak short sentences. I also found that I had to enunciate clearly, or else “what time should we meet?” might become “attention to me.” Still, it was a pretty neat tool.

Fun aside, I had some network issues. The reception was often markedly worse than that on the HTC G1 phone using the same SIM card from T-Mobile. And while surfing the Web, I noticed the Nexus One was often using T-Mobile’s EDGE network, rather than the speedier 3G network, and I was often unsuccessful in attempts to load YouTube videos.

Although I didn’t experience any dropped phone calls, the number of bars showing the quality of the reception often dropped suddenly as I was about to make a call. That’s odd because the reception’s usually good in my apartment when using another phone on T-Mobile’s network. And several times while talking to friends, I felt as if the phone’s volume was rising and falling.

It was also exasperating to have such a nice screen that didn’t support multiple-finger touches as the iPhone does in letting you pinch your fingers together and apart to zoom in and out of images and Web pages.

The Nexus One has a pretty good 5-megapixel camera — better than the iPhone’s — but if you want to see your snapshots up close, you’ll still have to press the little on-screen magnifying icon over and over again. That’s not very advanced for a “super” phone.

And though looks aren’t everything, I did wish the handset was more of an attention-grabber. The Nexus One’s silvery gray and black exterior gives off a sort of industrial chic vibe. It just doesn’t pack the same sexy geekiness that the iPhone has in spades, though.

A sweet phone, definitely, but super, it’s not.

Video-editing app LumaFusion to get a Galaxy Tab S8 launch
How Apple can fix iOS 16’s messy lock screen customization in iOS 17
OnePlus’ new Android update policy matches Samsung, shames Google
Get these JBL earbuds and 4 months of Music Unlimited for $25
Apple Cyber Monday Deals: Apple Watch, AirPods, iPad, MacBook
This 10-inch Lenovo tablet is $129 for Cyber Monday (selling fast)
Save $200 on the Samsung Galaxy Tab S7+ with S Pen for Cyber Monday
The best smartphone stocking stuffers for the 2022 holidays
Don’t buy the wrong iPad during Cyber Monday — get this one instead
Samsung’s Galaxy Buds earbuds line is discounted for Cyber Monday
Audible Cyber Monday deal drops the price of Premium by 60%
This is your last chance to get 3 months of Kindle Unlimited for just $1
My favorite iPhone MagSafe in-car holders are Cyber Monday bargains