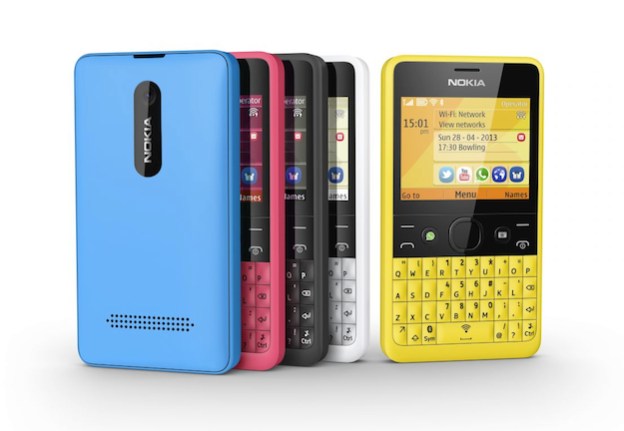 Nokia promised something new would come from its Finnish offices this week, and bright and early this morning, it did indeed launch a new phone. We had half-expected Nokia to announce a pair of new devices, as its promo picture seemed to indicate, but it’s only one – the Asha 210.

That’s right, it’s not a new Windows Phone, or the rumored Lumia 928, and neither is it the Asha 501 touchscreen phone (as we speculated it may be), as the Asha 210 has a QWERTY keyboard. But this is no ordinary Asha phone, as not only is the design closer to one we expect to see wrapped around one of Nokia’s Lumia phones, but it’s the first phone to come with a dedicated WhatsApp button.

It sits to the left of the D-pad below the screen, and provides instant access to the popular cross-platform instant messaging app, plus it integrates with your contact list so you know who else is using the service. The addition of WhatsApp, for free, gives the Asha 210 its own version of iMessage or BlackBerry Messenger, as it uses data to send messages and neatly avoids any SMS charges. The Asha 210 is only a 2G phone though, but it does come with Wi-Fi. The WhatsApp service will be subscription free for the lifetime of the phone, however not everyone will get it, as in some markets it’ll be replaced by a Facebook button.

Nokia’s chunky – it’s 11.8mm thick – new Asha has a 2.4-inch screen with a 320 x 240 pixel resolution, a 2-megapixel camera, a microSD card slot, and Bluetooth 2.1. It runs the Series 40 operating system, and comes with a variety of apps built-in, including Nokia’s Xpress web browser, Nokia Slam for easy file sharing via Bluetooth, separate Twitter, Facebook, Gmail and YouTube apps, along with a voice guided self-portrait mode for the camera.

While this spec list won’t make smartphone owners weep, the battery life may do, as Nokia says the single-SIM Asha 210 will keep going for an astonishing 46 days before needing a recharge. The Asha 210 is set to go on sale before the end of June, will come in several bright colors, and has been given a $72 price tag.