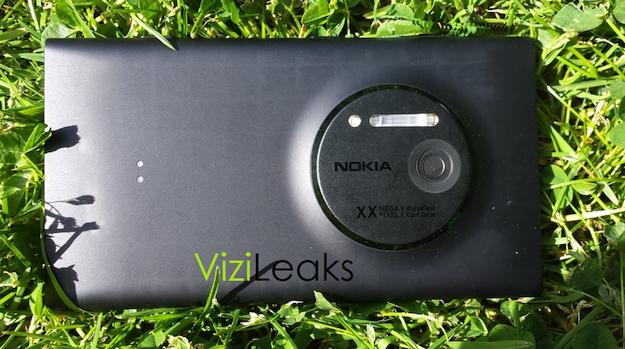 Nokia has made no secret of the fact it has another smartphone ready to release this year, even going so far as to mention it at the Lumia 925’s launch event. It’s becoming increasingly likely the phone in question is the Nokia EOS, a device which has been rumored for some time, but has been extensively leaked over the past few days.

The EOS, which is a codename, is expected to bring PureView camera technology to Nokia’s Windows Phone line-up – and properly this time, with a full-on 40-megapixel camera, rather than the 8.7-megapixel fitted to the Lumia 920, 925, and 928. Following on from the images of an incomplete shell already leaked, we’ve now been treated to pictures showing the phone from every conceivable angle, plus a video showing the camera’s shutter action.

The pictures come from multiple sources too, with GSMArena.com getting some great side view shots, and a new Twitter account named @ViziLeaks posting some high quality overviews of the device. As you can see from the side-on pictures, the EOS has a very pronounced hump housing the camera lens and what looks like a Xenon flash. No, it’s not quite as huge as the 808 PureView’s, but as Nokia has had at least a year and a half to miniaturize the technology, this is to be expected.

Although the megapixel count is cunningly disguised with a pair of X’s, the camera cover is stamped with PureView branding, and confirms the lens has been built by Carl Zeiss. As with Nokia’s other Lumia 92x phones, we’re expecting a 4.5-inch, 1280 x 768 resolution AMOLED screen, with a dual-core processor and up to 32GB in storage memory. The body shell seen in the pictures looks to be polycarbonate, rather than the aluminum/polycarbonate mix used for the Lumia 925.

Finally, you can check out the video below, which shows the phone is a working model, with the shutter to the camera opening and closing. So when will we see the EOS launched, and what will it be called? July is being talked about, but this is far from being official, and it has been linked in the past with a production name of the Lumia 1000.

Video-editing app LumaFusion to get a Galaxy Tab S8 launch
The most innovative smartphones of 2022
The most innovative tablets of 2022
The best Samsung Galaxy S22 Ultra screen protectors for 2022
The Galaxy Z Flip 5 might fix the Flip 4’s biggest design flaws
Fitbit Cyber Monday Deals: Save on Sense 2, Charge 5, and Versa 2
Apple Cyber Monday Deals: Apple Watch, AirPods, iPad, MacBook
Get these JBL earbuds and 4 months of Music Unlimited for $25
OnePlus’ new Android update policy matches Samsung, shames Google
How Apple can fix iOS 16’s messy lock screen customization in iOS 17
The best voice-changing apps for Android and iOS
Spotify Wrapped 2022: what it is and how to view it
Save $225 on the unlocked Samsung Galaxy S22 Ultra with this deal