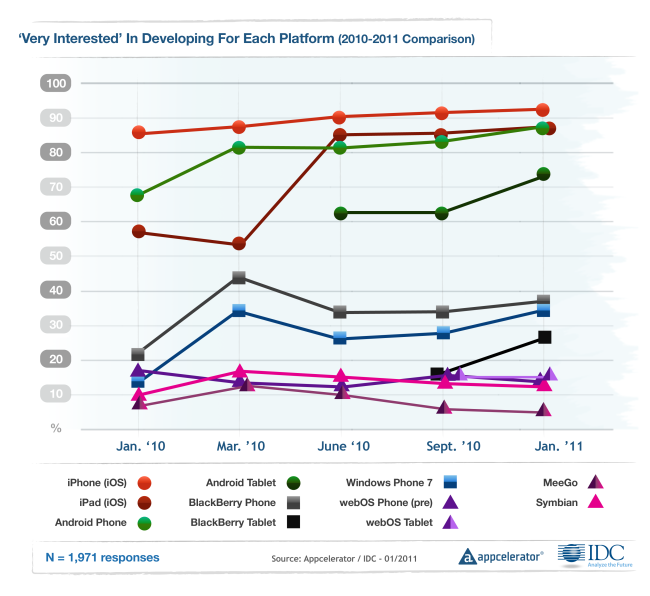 With all the attention lavished on iOS and Android systems, it seems like other reputable operating systems like Microsoft and RIM get the cold shoulder. But a new study maintains that developers have a growing interest in gearing their work with the legacy companies’ platforms in mind.

A new survey from Appcelerator shows that while Microsoft and RIM haven’t detracted from the immense amount of developer investment in Android and Apple, they have hurt Nokia. Both companies saw an increase in developer interest, whereas Symbian attracted less than 20-percent, and MeeGo similarly struggled.

Developers are particularly drawn to RIM’s tablet, the PlayBook, with interest in building for the device doubling in the last few months. We thought the tablet was one of the most impressive at CES, and aside to some back-and-forth about battery life, it’s generally being heralded as an able iPad competitor. “Quite frankly, three months ago we thought this thing [PlayBook] was never going to take off,” Appcelerator’s Scott Schwarzhoff told Reuters.

The PlayBook isn’t the only device of its kind grabbing developer attention. Tablet appeal knows no bounds, and Android-based devices as well as the iPad are becoming increasingly popular.

Windows Phone 7 also saw a bump, and let’s be honest: Microsoft could use the ingenuity right now. There’s been some concern over the direction of the phone and when exactly an OS upgrade is coming. While attention from developers won’t solve all its problems, it certainly can’t hurt. The survey found that nearly 40-percent of developers are now “very interested” in Windows Phone 7.

It isn’t terribly revealing that smartphones and tablets have captured developer attention, but it is worth noting that connected TVs are losing it. Developer interest in both Google TV and Apple TV has waned, which is not a ringing endorsement for the struggling systems.