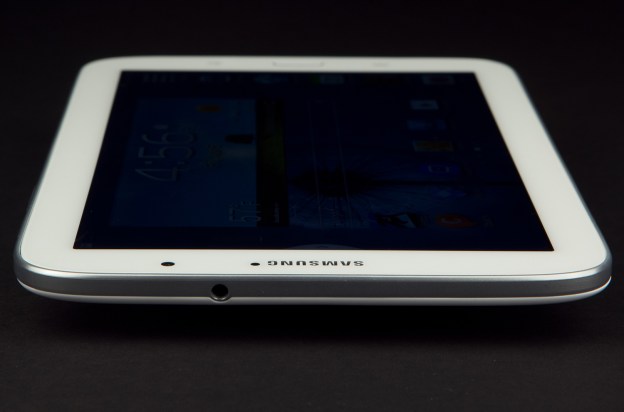 Following the announcement of the Galaxy Note 8.0 at MWC 2013, and this week, the refreshed Galaxy Tab 3, a roadmap of Samsung’s next tablet releases has now been leaked. The list shows four new slates potentially on the horizon from the prolific manufacturer, with all but one being Galaxy Tab models. It’s the non-Tab which is most interesting, but we’ll come back to that one shortly.

The report says we can expect a dual-SIM, which Samsung brands as DUOS, version of the 7-inch Galaxy Tab 3 and aside from the extra card slot, the specification will be identical to its single SIM cousin. After this, there are two larger Galaxy Tab tablets, one with an 8-inch screen and the other with an 11-inch display.

Samsung’s Galaxy Tab 8.0 has a spec sheet which looks very similar to the Note 8.0, except without the S Pen stylus. A quad-core Exynos processor will provide the power, while a 5-megapixel camera and a 2-megapixel video call lens take care of the imaging duties. To make up for the lack of the S Pen, the Galaxy Tab 8.0 will apparently get a 1080p resolution AMOLED screen, making it one of the smallest tablets to offer the feature.

Possible 11-inch tablets to be added to the range

Proving again it loves to try a range of screen size options, Samsung may add an 11-inch model to the Galaxy Tab range. The Tab 11 will have a dual-core chip, which will be based on the ARM Cortex A15 architecture and likely be the Exynos 5250 chip, an 8-megapixel rear camera and a 2-megapixel front-facing lens. There’s no indication whether the 11-inch display will also have a 1080p resolution though.

That brings us on to the one non-Galaxy Tab model, and it’s a potential follow-up to Samsung’s Nexus 10, but based on the Galaxy Tab 11. While the rest of the feature list is the same, the Nexus 11 as it’s called, may use the Exynos 5 Octa processor. This is the same one you won’t be finding inside a Galaxy S4 near you very soon, but as there is no mention of the Nexus 11 having 4G LTE capabilities (which is one of the reasons it’s not in the Galaxy S4) it does stand a slightly better chance of featuring inside the tablet. There’s no mention of which version of Android would be installed, but any new Nexus device traditionally goes on sale with a brand-new build.

The leak does say the Nexus 11 project is waiting for approval from Google, and that the 1080p screen on the Tab 8.0 will only happen if Samsung solves some issues with the AMOLED panel. So, if these rumors never come true, we’ve been given a possible reason why.