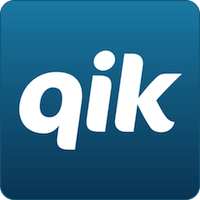 “I’m happy to announce that we’ve entered into a definitive agreement to acquire Qik, a provider of mobile video software and services that let people capture, instantly share and preserve great moments on video from anywhere,” Skype’s CEO Tony Bates said in a company blog posting.

The sale price was reportedly around $100 million. Qik has about 60 employees split between the company’s headquarters in Redwood City, California and another office in Moscow, Russia.

” Through this acquisition, we’ll also be able to take advantage of the engineering expertise that is behind Qik’s Smart Streaming technology, which optimizes video transmission over wireless networks,” Bates said. “Together, we’ll focus on providing great products that will allow people around the world to share experiences in real-time video across different platforms, as well as storing those moments so they can be viewed later.”