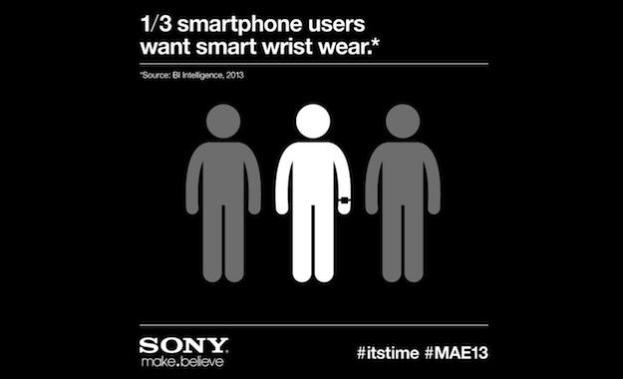 This week sees the start of the Mobile Asia Expo in Shanghai, and Sony has dropped several hints via Twitter about one of the new devices it will be exhibiting at the show. However, it’s almost certainly not a smartphone or a tablet, but a smartwatch instead.

The first tweet came just before the weekend, when Sony published a picture saying, “One in three smartphone users want smart wrist wear,” accompanied by an illustrative image and the hashtags #ItsTime, and #MAE13. Some time afterwards, a second tweet with the same hashtags said, “Tick-tock, tick-tock, tick-tock,” before a third and so far final tweet was posted saying, “Pocket watch/wrist watch/digital watch/LiveView/SmartWatch/?.”

All these messages came through Sony’s Xperia Twitter account, so it’s a safe bet we’re about to see the third generation smartwatch from the company. While Sony hasn’t provided any hints on the watch’s spec, CNet has been informed by an anonymous source the watch will have NFC connectivity, and be water resistant.

Sony has been pushing NFC for a while, and includes it on most of its high-end hardware, including the Xperia Z and the Xperia Tablet Z. Water resistance is one of the features which made these two standout in the sea of similar Android devices, so they both sound reasonable.

Smartwatches are a hot product at the moment, despite very few big name companies actually selling them, and although the current SmartWatch from Sony has struggled to find many fans, the new version, depending on its feature list and design, may be able to ride the wave of excitement around this type of device. However, if the previous generation Sony watches are anything to go by, the new model may only connect with Android phones and tablets, forcing iPhone owners to look elsewhere.

Mobile Asia Expo begins on June 26, and we’ll bring you all the news on Sony’s new watch when it’s announced.