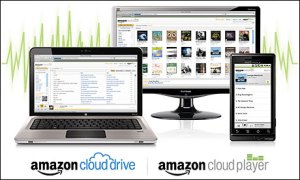 Amazon launched a pair of cloud services earlier this week: Cloud Drive, which offers remote data backup, and Cloud Player for Web, which allows purchased music to be streamed directly from your Cloud Drive to your computer or Android mobile device. Apple and Google were immediately pointed at as top future cloud competitors that had been beaten to the punch by Amazon’s launch, but it seems that Sony Music also has some problems with this latest turn of events.

Essentially, Sony’s beef is that Amazon launched its Cloud Player without first securing the necessary music streaming licenses. It’s a tricky situation though. While it’s true that Cloud Player streams in content to the end-user’s computer, that content comes directly from the Cloud Drive, as that’s where all MP3s purchased from Amazon are stored.

Sony’s not buying it, probably in part because of its own recently launched subscription-based music streaming service, Music Unlimited. Company spokeswoman Liz Young told Reuters, “We hope that they’ll reach a new license deal, but we’re keeping all of our legal options open.”

Amazon contends that streaming licenses aren’t needed in this situation, since the end-user is streaming content from a personal music locker stored remotely as opposed to a wide-open platform with content that can be accessed by anyone. “We do not need a license to store music in Cloud Drive,” Amazon spokesperson Cat Griffin told Ars Technica. “The functionality of saving MP3s to Cloud Drive is the same as if a customer were to save their music to an external hard drive or even iTunes.”

Sony’s fellow major music labels — EMI, Universal Music Group and Warner Music — have issued no public statements regarding Amazon’s cloud launch yet, but the belief among outside observers is that the online retailer didn’t pursue licensing deals at all for Cloud Player’s streaming capabilities. In short, Amazon has effectively sped the industry along to a significant crossroads.

On one hand, you have the online retailer claiming that streaming licenses don’t apply here since users are really just accessing owned content from what amounts to a remote hard drive. Sony, on the other hand, contends that Amazon is in the wrong on this thinking. The two companies are essentially locked in a corporate game of chicken, and since there’s no immediately obvious legal precedent to back up either argument it seems likely that this will all end up playing out in court, as Sony hinted.

Topics
Video-editing app LumaFusion to get a Galaxy Tab S8 launch
Apple Music vs. Spotify: Which music streaming service is the best?
How to create a Smart Playlist in Apple Music
Sony WH-1000XM5 are $50 off in the Best Buy Prime Day sale
The best free music apps for iOS and Android
The best phones in 2023: which smartphone should you buy?
You shouldn’t buy the Galaxy S23 Ultra — and that’s the best thing about it
Netflix for books: Get 2 months of Kindle Unlimited for free
The best Android phones in 2023: top 10 best ones you can buy
We have the Vivo X90 Pro, one of 2023’s most interesting Android phones
Forget the Steam Deck — this modded Android phone is a gamer’s dream
This Galaxy S23 Ultra case gives Samsung users a huge iPhone 14 feature
LastPass vs. 1Password: should you switch?