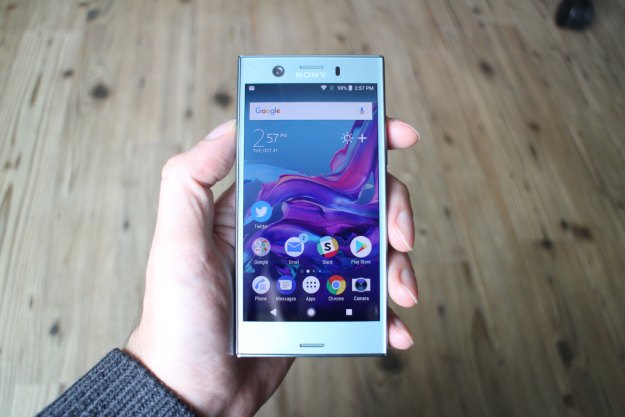 “The Sony Xperia XZ1 Compact is one of the few, powerful, small Android phones around, but it’s too expensive.”

Sony has failed to keep up with the smartphone crowd over the last few years, but it’s one of few still making small phones that can pack a punch. The Sony Xperia XZ1 Compact has the same cutting-edge processor, camera, and battery in as the flagship XZ1 . It’s fast, slick, and can be comfortably used one-handed. It stands out in a sea of large-screen phones, but it’s not an unqualified success. At $600, we wish Sony could have found a way to shrink the price tag as well as it did the hardware. There are things we like very much, but there are also some serious issues here.

Sony still shows no interest in jumping on the bezel-less bandwagon, but it’s not just the large borders above and below the 4.6-inch display that bother us here. The XZ1 Compact is seriously chunky at 9.3mm thick.

The glass fiber plastic body feels and looks a bit cheap. We don’t like the seam where it meets the Gorilla Glass 5 on the front. Flat, angular, metal panels on the top and bottom accentuate the bulky look. It reminds us of a portable battery charger, which is not a pleasing aesthetic for a phone.

You’ll find a standard 3.5mm headphone jack at the top and a USB Type-C charging port on the bottom. On the left spine there’s a fiddly flap that houses incredibly thin plastic trays for the MicroSD card and the SIM card. Our SIM card tray proved a little tricky to open. The only advantage of these silly flaps is that you don’t need a SIM tray tool to open them.

The right edge has a lozenge-shaped power button in the middle with a volume rocker above and a camera shutter button at the bottom, perfectly placed for capturing shots when you hold your XZ1 Compact in landscape orientation.

We’re reviewing the U.S. version of the XZ1 Compact here, so the power button is just a power button. It’s worth noting that if you buy it anywhere else in the world the power button will also work as a fingerprint sensor. Sony has never adequately explained why it does this in the U.S., citing “business reasons,” but it is extremely annoying to have to use a PIN or pattern again.

The Sony Xperia XZ1 Compact is a fast, slick device that can be comfortably used one-handed.

On the back there’s the camera lens at the top left, ringed with a shiny metal highlight, and a flash module in the middle. Flipping back over to the front, Sony has made some use of the big edges flanking the screen to include dual front-facing speakers, alongside the front-facing camera and other sensors.

Switching to the XZ1 Compact from the iPhone 8 was jarring in terms of design. These are similarly sized phones, but Apple’s all-glass sandwich is much more stylish and a full 2mm thinner than the XZ1 Compact.

We don’t even have to compare Sony’s latest with Apple’s to find fault. Casting our minds back to the Xperia Z1 Compact, which we loved, it’s hard to escape the feeling that Sony is going backwards on design. We should note, Sony said its phones will get a redesign, and expect to see this next year.

The Xperia XZ1 Compact comes in White Silver, Black, Twilight Pink, or Horizon Blue. Our review unit was blue, and the plastic body has a kind of metallic sheen to it.

You’ll find a dinky 4.6-inch display in the Xperia XZ1 Compact with a resolution of 1,280 x 720 pixels, which is adequate for a screen this size. The iPhone 8 is a hair sharper. The Compact’s colors are vibrant and it’s gets bright enough to see the screen outdoors.

We did not find ourselves missing the higher resolutions of other phones, but we did miss the size. It’s a lot easier to read on a phone like the HTC U11 or the Samsung Galaxy S8, but they obviously pack much larger screens.

The Xperia XZ1 Compact looks like quite a tough device and indeed it has an IP65/68 rating, but you must be very careful to shut the flap tightly before exposing it to water. Rain is nothing to worry about and it should survive a dunk in the bath.

If we had to highlight one good thing about the Sony Xperia XZ1 Compact beyond its small stature, then we’d pick performance. With a Snapdragon 835 and 4GB of RAM inside, this phone is fast.

We had no issues playing games. From Asphalt 8 to Star Wars: Commander, everything loaded and ran smoothly. We also streamed some Netflix and tried out some music to test the front-facing speakers and they performed admirably.

General navigation is silky smooth, and the pleasing performance was confirmed when we ran the usual batch of benchmarks. Here’s how the Xperia XZ1 Compact scored:

Those are great scores that put the XZ1 Compact in the same performance category as Android flagships like the LG V30, the HTC U11 and the Samsung Galaxy Note 8. Perhaps unsurprisingly, they’re almost identical to the scores its bigger sibling, the Sony Xperia XZ1 got. Only Apple’s iPhones can best that – the iPhone 8 scored a massive 214,492 on AnTuTu.

Camera is a mixed bag

Sony makes excellent camera hardware, as evidenced by the fact that you’ll find Sony image sensors inside everything from Google’s Pixel 2 to the latest trio of iPhones. What it seems to struggle with is the software side and image processing, so hardware that sounds great on paper often under delivers in the real world.

With a Snapdragon 835 and 4GB of RAM inside, this phone is fast.

The XZ1 Compact boasts a 19-megapixel main camera with an f/2.0 aperture. That’s the same camera you’ll find in the XZ1 and the XZ Premium. Shooting with the default Superior Auto mode, most photos turned out very detailed with accurate colors, but we ran into two issues that bothered us.

Firstly, the autofocus jumped around a lot and we often struggled to get it to focus where we wanted. This resulted in several shots with blurry subjects. Secondly, and more problematically, we found that low light photos were filled with noise and distinctly fuzzy around the edges of objects like buildings or tree branches. We’re not talking about dark conditions here, just your average overcast day in Scotland.

We do like the inclusion of the dedicated camera button, and while we though there’s a chance it could be introducing some movement that’s causing the blurring, switching to the onscreen shutter button didn’t make much difference. It’s a good camera overall, but it doesn’t match the latest flagships from competitors.

At $600, Sony is asking too much for the Xperia XZ1 Compact.

Most people won’t use it, but there is also an in-depth manual mode if you want to tweak your settings and explore the camera’s capabilities.

The front-facing camera is rated at 8 megapixels with an f/2.4 aperture and a wide 120-degree field of view that’s perfect for group selfies.

When it comes to video, the Xperia XZ1 Compact has a nifty trick up its sleeve – slow motion 960 frames per second at 720p. It can also record 4K at 30fps, and 1080p at up to 60fps. The slow motion feature is fun, but you really need good lighting or the resulting footage will be extremely noisy.

Android 8.0 Oreo with a Sony touch

We’re pleased to find that the Xperia XZ1 Compact runs the latest Android 8.0 Oreo out of the box, because too many manufacturers lag on Google’s latest Android releases. But Sony has applied its own user interface over the top. It’s not as elegant as stock Android, but it looks and works just fine.

Sony does, unfortunately, feel the need to preload lots of useless apps, which is disappointing because this phone only comes with 32GB of storage and only around 20GB free out of the box. Thankfully, there is a MicroSD card slot for storage expansion.

The Xperia Lounge and Sony’s What’s New app are the worst offenders, but we quite liked the 3D Creator, which allows you to scan people or objects and create 3D models of them.

Sony has packed the same 2,700mAh battery into the Xperia XZ1 Compact as you’ll find in the XZ1. The Compact has a much smaller, lower resolution display to power, so we’re not surprised to find the battery lasts much longer.

With medium use we always had plenty of battery life remaining at bedtime. The Xperia XZ1 Compact can even go two days before needing to be plugged in, if you’re careful.

It’s also quick to charge, with support for Qualcomm’s Quick Charge 3.0 via the USB-C charging port. When we tried it out, it went from 19 percent up to 79 percent in just under an hour. You can expect it to take about 2 hours to fully charge from near zero.

The Sony Xperia XZ1 Compact has a standard one-year warranty that covers defects in design, materials, or workmanship. You’re not covered for accidental or water damage, so be careful.

You can buy the Xperia XZ1 Compact from online retailers like Amazon and it will cost you $600. It’s not available from carriers, but it supports GSM networks, so it will work just fine on networks like AT&T and T-Mobile. If you’re on Verizon or Sprint and don’t want to switch, then the Xperia XZ1 Compact is not for you.

The Sony Xperia XZ1 Compact is a decent phone with good battery life, great performance, and the latest version of Android. It’s a shame it’s too expensive, looks dull, the lack of a fingerprint sensor is irritating, and the camera simply isn’t as good as it should be.

If you prefer something smaller, check out the Essential Phone ($500) or the Google Pixel 2 ($650). They have their flaws, but they’re both better prospects than the Xperia XZ1 Compact and feel a little more contemporary.

If you don’t care about sticking with Android, then Apple’s iPhone 8 is worth a look. It’s a very similar size and it’s a better phone, but it does cost an extra $100.

If you do buy a Sony Xperia XZ1 Compact, then you can expect to get a couple of years out of it. There’s enough power there to future-proof it for the foreseeable. Our Xperia Z1 Compact lasted three years before the power button began to fail. We think you’ll get sick of the XZ1 Compact and want to switch it long before it actually gives out.

No. We think there are too many better options for most people. If you’re a die-hard Sony fan, or you have your heart set on a small form factor, and you live outside the States so the fingerprint sensor works, then the Xperia XZ1 Compact is worth considering. Everyone else can do better.