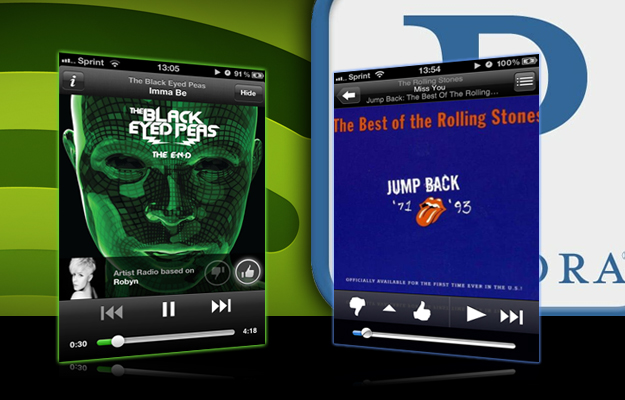 Today, Spotify announced its new radio feature for its iOS app. The music streaming service’s desktop client has long had this capability, but the mobile version has only offered up pre-made playlists or searchable content. The introduction has, to no one’s surprise, culminated in a renewed wave of “watch out, Pandora.” So, should it? Here’s a quick look at what the legacy streaming radio service offers that Spotify doesn’t, and how the newcomer manages to step up to the plate.

Check out our Spotify Radio vs. Pandora comparison for the desktop versions of the software.

Spotify is very up front about how many skips you get – and that number is five. The app contains a countdown letting you know how many more you’ll get before you’re forced to sit it out and listen. Hitting thumbs down won’t skip the song (as it does with Pandora), and won’t count toward a skip unless you also hit the forward button.

Pandora doesn’t tell you how many skips you get, but in my hands on time, it took six songs until I was told I’d reached my allotted amount for the session. I realize that the counter Spotify offers is a nice touch, though – I’ve used Pandora for years and always wondered how many skips I have left. It helps you portion them out, so if a song you don’t necessarily like but can still tolerate plays, and you’re down to two more skips, you’ll know it’s probably wise to sit through it.

The Pandora app scatters a few audio ads into the listening experience here and there, but it also sells visual ad space – and this a great sort of “out” for users. If I’m listening to the Pandora app, I’m rarely interacting with the app itself unless I really feel the need to clue the service into whether or not I like or dislike a song. And if you happen to choose to open up the app while a display ad is up, you simply X out. Sell all the mobile ad space you want here, Pandora: I’ll see it, but it doesn’t hurt my experience, and it cuts down on the interruptive ads I have to listen to.

Since the new Spotify radio feature is free and the free version for PC is pretty ad-filled, I expected the same from the app. Surprisingly, it wasn’t horrific and I felt like there was less commercial time than when I listen to Spotify as my desk. That said, Pandora still had fewer ads, although obviously not if you count the display advertisements. I’m wondering if Spotify radio ads will increase in the near future in order to pay rights owners for access to these tracks, which is an increasingly expensive endeavor. It’s something Pandora continuous to deal with.

With radio apps, discovery is what actually matters. The quality here is important, and it’s difficult to quantify because music is a very objective thing. How do you measure how well you’re finding new music you like, and how can you say how that applies to anyone else? Well, you concretely can’t, and that’s why I’m going to have to make a few generalizations here.

We’ve all known since its inception that Pandora is powered by the Music Genome Project. It’s an algorithm as closely backed by science as something like this can be. Pandora’s longevity also gives it clout with users: some of us have been painstakingly curating these radio stations for years, thumbing songs up and down, adding artists and genres and tracks to create the perfect station and enjoy the discovery fruits of our efforts.

Spotify hasn’t produced that impressive of a radio and discovery option thus far. Its discovery efforts on the desktop client have been incredibly lacking: in all of my experiences, I’ve circulated through the same handful of songs, and I cannot think of one occasion in which I’ve come across a new song or artists I like thanks to the Spotify feature. The service relies on the social graph for its discovery efforts, so if you listen to The Black Keys,  it takes to Facebook to see what else people who like the band listen to. And as we’ve learned, the masses don’t always know what’s best. Spotify’s strength, of course, doesn’t lie in powering a music discovery service, it lies in its database of available music — 16 million songs, and counting. Creating my own specific playlists is why I use Spotify, not to find new artists.

Perhaps one of the strangest things about the new Spotify radio app: it doesn’t correspond to the desktop client version. The desktop’s radio feature doesn’t have any like/dislike tools or skip restrictions. It’s purely a stream of music, and ads of course. It’s a comparably simpler application, but it’s strange that Spotify wouldn’t make the two ways you can experience its service line up. I want my curated radio application to function the same from smartphone to desktop.

The Pandora app, on the other hand, is a mirror of the site. Sure, the interface is different, but you have all the same capabilities and options that you have at your computer available in the mobile version as well. Perhaps there’s a Spotify desktop upgrade in the near future to right this wrong.

All in all, the Pandora and Spotify radio apps are incredibly comparable. They each pull ahead in different areas – Spotify’s skip counter is nice, Pandora has fewer ad interruptions – but Pandora still nails what I think is the most important part of all this, and that’s discovery. I don’t want to spend time listening to music I don’t like because Facebook says my social graph deems it so. Until Spotify can somehow iron out that kink, I’ll be sticking to the Pandora app.