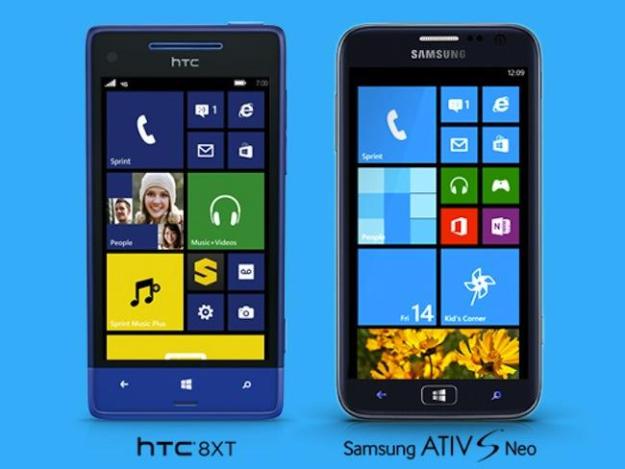 Check out our review of the HTC 8XT and Samsung ATIV S Neo phone.

The HTC 8XT takes the One approach, introducing front-facing dual stereo speakers to the Windows Phone market, gearing itself toward music lovers. The device rocks the quality sound that comes with its Beats Audio speakers, which the company says “delivers thundering bass, soaring midrange, and crisp highs.” The phone has a 4.3-inch screen, is powered by a 1.4GHz dual-core Qualcomm Snapdragon 400 processor, comes with 1GB RAM, and has 8GB storage with a microSD card that allows for expansion of up to 64GB. It sports an 8-megapixel rear-facing and 1.6-megapixel front-facing camera.

Samsung’s ATIV S Neo is Sprint’s latest offering for users looking to make the most of their smartphone’s camera. The camera specs are pretty run-of-the-mill — 8 megapixels in the back, 1.9 megapixels in the front — but it comes pre-loaded with a slew of camera apps. Beauty Shot helps deliver smooth-looking skin for impromptu headshots; Manga Camera adds whimsy to shots by giving everything the cartoon treatment; and Photo Editor does exactly what you think it does. It’s powered by a 1.4GHz dual-core processor and comes with 1GB RAM. Oddly enough, Sprint isn’t saying how much storage is on-board, but the device does come with a microSD slot, so we’d imagine it’s at least expandable up to 64GB, like the 8XT.

There’s no word on the exact availability for either device, but you can sign up for updates here. Once made available, the HTC 8XT will be just $100, while the Samsung ATIV S will be $150, after a mail-in rebate and two-year agreement.

Topics
Video-editing app LumaFusion to get a Galaxy Tab S8 launch
OnePlus’ new Android update policy matches Samsung, shames Google
Best Cyber Monday Phone Deals: Pixel 7, Galaxy S22 and more
Samsung’s Galaxy Buds earbuds line is discounted for Cyber Monday
Save $200 on the Samsung Galaxy Tab S7+ with S Pen for Cyber Monday
Fitbit Cyber Monday Deals: Save on Sense 2, Charge 5, and Versa 2
Apple Cyber Monday Deals: Apple Watch, AirPods, iPad, MacBook
Get these JBL earbuds and 4 months of Music Unlimited for $25
How Apple can fix iOS 16’s messy lock screen customization in iOS 17
The best voice-changing apps for Android and iOS
Spotify Wrapped 2022: what it is and how to view it
Save $225 on the unlocked Samsung Galaxy S22 Ultra with this deal
Samsung Galaxy Z Fold 4 is $350 off — no trade-in needed