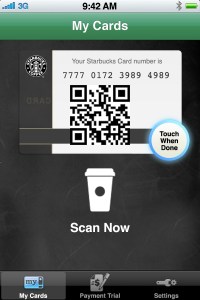 Starbucks on Wednesday launched a mobile payment system at 6,800 stores nationwide and in 1,000 locations in Target stores. Starbucks patrons will now be able to pay for their lattes using a Starbucks app. The free app is currently available for Apple’s iPhone and iPod Touch and for RIM’s BlackBerry.

Customers will be able to access a barcode linked to their accounts, which then is scanned at the counter. The mobile payment system is tied into Starbucks’ existing app feature which lets users add money to a Starbucks payment card. Mobile users can add money to their accounts by credit card or through PayPal.

Starbucks is hoping the system will become widely adopted. In testing, Starbucks determined that the mobile payment system is faster than cash, credit, or Starbucks card.

Starbucks developed their own 2D bar code scanning technology that makes use of devices’ built-in cameras. The company is reportedly investigating the possibility of adapting near field communications technology (NFC) for a future mobile payment system, but will wait until the tech is more widely available before moving forward.

Starbucks is currently working on version of the mobile payment app for Android devices, but there’s no official word on when it will be available. The new payment system is Starbucks’ second big release of the week. On Monday the company unveiled a new 30 ounce “Trenta” drink size.