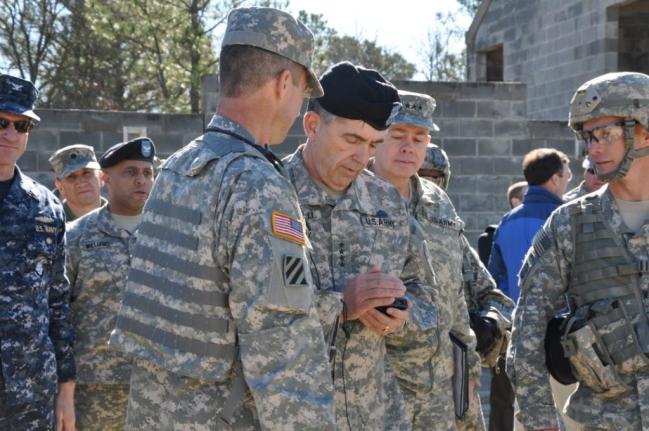 The United States Army has been kicking around the idea of putting smartphones into its soldiers’ hands for at least a few months now. But up until recently, the Army’s top brass was having a dilemma shared by many civilians: iPhone or Android?

Android, welcome to the Army. The service announced its decision earlier this week to move forward with an Android-based prototype called the Joint Battle Command-Platform. Officials are still deciding whether the framework will run on a government-designed handset or a commercial model with a “ruggedized tactical sleeve or case.” Either way, the Army says its designing the software to be capable of running on a variety of Android-ready platforms.

The government-owned development kit, called Mobile/Handheld Computing Environment, that’s behind the modified version of Android will be released to third-party app developers this summer. Meanwhile, the Army is working on its “Mission Command Apps,” which include mapping programs, a blue force tracker for identifying friendlies and a “critical messaging” tool.

The Army’s interest in having an operating framework that can run a secure selection of apps on a variety of devices is likely what drew its interest to Android and away from Apple’s iOS. Apple’s iOS runs on one single smartphone, the iPhone, and is known for its relatively closed architecture.

Of course, there are major issues to be addressed before the Army starts making the Joint Battle Command-Platform standard issue. How to keep the devices and their software secure is one major concern for the Army. Keeping the devices connected to a wireless communications network in a variety of environments is another problem.

With a target date of fiscal year 2013 to get smartphones fielded to personnel, the Army isn’t in a huge rush to push the project out the door.