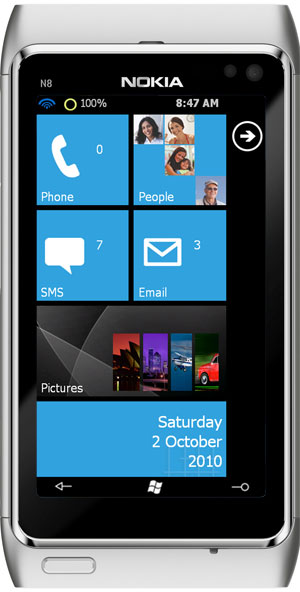 There has been a lot of chatter about the potential benefits of a Windows Phone 7 and Nokia merger, a scenario where the Finnish hardware-software maker would abandon its platforms and side with Microsoft, which would grant the company exclusive access to Windows Phone 7. Financial folk seem to love the idea; Nokia’s stock even started to rise on rumors that the company was actually investigating WP7. To those who think this is a good idea, I ask just one question: What the hell are you thinking? Merging Windows Phone 7 and Nokia would be like tying two drowning people together and hoping that together they can swim.

Here is a snippet of the brunt letter.

“Steve, you are probably thinking, ’What do we gain on the back of this?” Well, two million units shipped in the last quarter is not really much to write home about, given $500m in marketing programmes (ouch), but with Nokia on-side, you get access to a potential 20-25% global share over time – and EXCLUSIVITY. Right now, do you really think HTC, Samsung and LGE are pushing your products ahead of Google’s? You need to tie yourself to a high-volume player to be relevant, which I know goes against your DNA. But do not forget that your MS-DOS software was originally only for IBM and then claimed a near-monopoly in the market. And, Steve, if you are successful, we will all forget your quotes from 2007. Do you remember this one: ’Apple is a cute, little, tiny niche guy?’ Or this one: ’No chance Apple iPhone is going to get any significant market share?’ (Ouch x2.) More importantly, your shareholders are going to be impressed that you have not gone after an expensive acquisition strategy in what is really (let’s face it) a consumer electronics industry.”

Ahmad reasons that Nokia is spending too much on research and development (R&D) working on its own custom operating systems, and would benefit from the high-end smartphone market and U.S. access that Microsoft could help it attain. Microsoft, in return, gets eventual access to the large phone market share that Nokia currently holds around the rest of the world, and a partner that will focus on Windows Phone 7 exclusively. His reasons sound decent when written in a cheeky open letter, but they don’t hold up to reality. Neither Microsoft nor Nokia would benefit from a merging or exclusive arrangement.

Yes, Nokia and Windows Phone 7 are both in trouble. While Nokia continues to do well around the world in the low-end feature-phone market, it has next to no presence in the United States, which has moved to more flexible, snappier app-based operating systems like Apple’s iOS and Google Android. Older smartphone OS’s like Nokia’s Symbian, RIM’s BlackBerry, and Microsoft’s Windows Mobile are being squeezed out of the market by these newer, shinier touch-based operating systems. Nokia has tried to adapt with devices like the N8, but hasn’t been able to find a U.S. wireless operator willing to subsidize its high-end phones for several years. As a result, most of its devices are only able to be ordered online, and are too expensive ($500+) to gain much traction.

Microsoft had a similar problem with Windows Mobile, but has been a lot more proactive in finding a solution. The company rewrote its mobile software from the ground up, basing much of it on the interface concepts developed on its underrated Zune brand of MP3 players. The fruit of its efforts, Windows Phone 7, hit the market on nine devices in early November to a reasonable amount of critical acceptance. The phone’s interface is a personal favorite of mine, and shows that Microsoft can develop a forward-thinking platform. Unfortunately, the OS has had a rocky start due to the mammoth popularity of Android devices and the iPhone 4. Through the holidays, Microsoft only sold about 2 million WP7 devices to retail partners — less than the software maker had hoped. With no new WP7 devices shown since launch, many have begun to fear for the OS’s future in the market. Certainly, 2011 will be an important year for Windows Phone 7 to show its strength. It should not, however, be the year Microsoft abandons the open licensing platform that made Windows (and Android) successful in the first place.

So why not partner? Well, how would joining forces truly benefit Microsoft and Nokia? Yes, Nokia may save some money on R&D (though it can’t get back the billions it has already spent) and Microsoft would gain an exclusive partner with some actual market share around the world, but the benefits for both companies would be short-lived. By exclusively partnering, Microsoft would put great limits on the potential success of its WP7 platform and Nokia would be forced to follow Microsoft’s lead on software, something the company is not used to doing. A merger of this sort could also have the unintended consequence of further miring both of these traditionally bureaucratic companies in a tangled web of decision-making.

A joint Microsoft and Nokia would mean that one of the least successful platforms (so far) in the United States was partnering with one of the least successful hardware makers. While there is still a glimmer of hope that WP7 will take off over time, Nokia has shown little to no ability to adapt to the North American market. Its devices look out of place, and often antiquated, when put next to competitors that understand the market like Samsung, HTC, Apple, and Motorola. Building WP7 into its hardware will not give either company more leverage in the United States or other high-end smartphone markets.

Today’s high-end markets will trickle devices to tomorrow’s low-end markets. Android and iPhone smartphones have already shown great growth in most markets around the world. Even Nokia’s iron grip on the feature phone market appears to be slipping as customers begin to move to more media-rich devices.

You can go your own ways

Microsoft’s chief competitor is Android, an OS that has taken the Windows model of being on any device and taken it to the Nth level. Android is a completely open-source platform, free for anyone or any device manufacturer to use. Tying itself to one device manufacturer is the opposite of what Microsoft needs to do to compete with Google. Microsoft’s success depends on Windows Phone 7 infecting every device, not just the devices of one manufacturer. WP7 is already an elegant and competitive OS, but MS should learn from its slow debut in the U.S. that it must take a cue from Google and make its platform less expensive to license, more open, and more customizable by hardware makers.

Nokia has always been a hardware and software company. Like Apple, it has thrived on marrying its hardware to its own customized operating systems. Nokia does have a bloated R&D budget,  but I’d argue that such an inflated emphasis on research and development is necessary for the Finnish company. For years, it has fallen behind industry trends. It now must catch up. The company has spent billions creating its Ovi brand, adding new features like Ovi Maps turn-by-turn navigation to its phones, and creating a completely new OS named MeeGo, which it is set to unveil sometime this year, perhaps on Feb. 11. Why would Nokia abandon MeeGo before it ever has a chance on the market? Nokia has placed all of its eggs (billions of dollars) into MeeGo. It would be almost schizophrenic to abandon a near-finished OS in favor of a new, but struggling platform like Windows Phone 7.

With that said, it would not hurt either company to partner on a few devices or a line of devices. Nokia could use diversification in its product line and Microsoft could stand to benefit from any hardware maker supporting Windows Phone 7 in a substantial way. Such a non-exclusive partnership would show that Nokia is willing to change and that WP7 is still interesting to some hardware makers. All of this talk about exclusive partnerships is ridiculous. It would be a bad move for Nokia and Microsoft. However, it never hurts to make a new friend, and both Microsoft and Nokia could use a friend right now.

Topics
Video-editing app LumaFusion to get a Galaxy Tab S8 launch
How to find downloaded files on your iPhone or Android smartphone
I’m ready for a folding iPhone — but only if it has these 5 things
iPhone 14 Pro: how to make your always-on screen black
iOS 17 could be amazing if Apple makes these 7 changes
How to sync your Outlook calendar with an iPhone
Secure Your Value: Lock in the price of your Verizon phone plan for 3 years
AirTag helps flyer find his AirTag – but not his missing wallet
Best Apple Deals: Save on AirPods, iPads, MacBooks and more
The Garmin Vivomove Trend is a powerful smartwatch with a sleek disguise
Anker’s newest chargers are a perfect pairing for the Galaxy S23
Best tablet deals: Save on Android tablets, iPad and more
The Kindle Paperwhite now comes in two stunning new colors