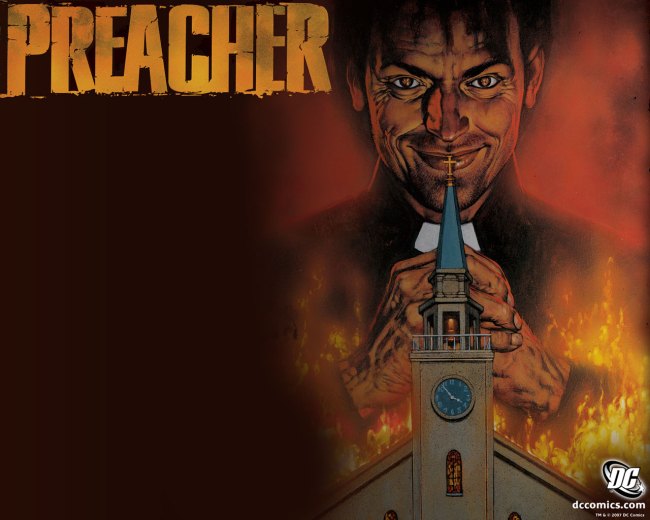 Fool us once, shame on you. Fool us twice…well, won’t get fooled again. Preacher, one of the best damn comic books of all time (opinions may vary…), is once again heading to Hollywood for a possible film adaptation, this time with director DJ Caruso (Eagle Eye, Disturbia) officially signed to direct.

The signing was reported by Cominsoon.net, which caught a tweet from Caruso that read:

My deal just closed on Preacher. Going back to the dark side and pretty f*cking pumped!

While the language he uses may seem a bit gauche to some, for the adaptation of Preacher, it seems exactly right. Rumors of Caruso directing the film version of the Vertico/DC comic began floating a few weeks ago, but any chance of the signing being official were said to be reliant on how well Caruso’s recent film, I Am Number Four, fared at the box office. The movie opened to moderate numbers of around $23 million in the first weekend (which almost ensures the film will make back its $50 million budget through foreign take if nothing else), and despite mixed reviews for the film itself, most reports praised Caruso’s directing which seemed to land him the gig.

Preacher is the story of Jesse Custer, a preacher in a small Texas town who is hiding from his past at the bottom of a bottle, when a supernatural entity known as Genesis embeds itself in Jesse and wipes out his entire congregation. Jesse soon runs into a hard partying vampire named Cassidy, and his ex-girlfriend Tulip who still carries a torch for him as well as a grudge against him for running out on her years earlier. Soon everyone wants a piece of Jesse, from angels to secret organizations, and the preacher decides to use his power to track down God and determine why he has abandoned us.

The comic, written by Irish writer Ennis, is a modern day cowboy epic with a supernatural twist. The series ran from 1995-2000, and released 75 issues including spin-offs.

For those keeping tracking, this is not the first rodeo for the property. The first time the comic came up through the Hollywood machine was 1998. Since then, the series has been discussed as a possible movie, TV series, and mini-series, and the following actors, writers and producers have all had their names attached to the project at one time or another: Rachel Talalay, Rupert Harvey, Tom Astor, Kevin Smith, Scott Mosier, Bob Weinstein, James Marsden, Mark Steven Jacobson, Howard Deutch, Sam Mendes, Neal H. Moritz and John August. Add Caruso to that list.

So while the news is interesting, it is also a long way from being anything more than a potential script treatment and a handful of meetings. More on this if and when it develops.

Kathryn Bigelow signs on to direct Aurora for Netflix

The Batman: Villains we could see in HBO’s Penguin spinoff

The Batman: The movies and comics that inspired the hit film