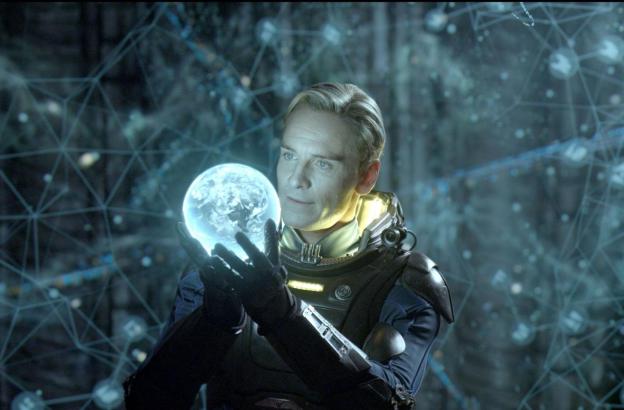 Ridley Scott’s Prometheus arrived in theaters over the weekend, and like previous films by the Alien and Blade Runner director, future-world technology plays a big role in the universe his characters inhabit.

From suspended-animation stasis to flying drones that map the interior geography of caves, the tech available to the crew of the spaceship Prometheus is more than just the stuff of science-fiction stories — in many cases, that technology has roots in the real world.

Anyone with an eye on the future when it comes to tech can’t help but wonder when we’ll see some of these cinematic creations become a reality, so here are five of our favorite pieces of technology appearing in Prometheus, and how close we are to getting the real thing.

In Prometheus, the crew of the ship is kept in suspended animation for several years in order to reach LV-223, the distant moon identified by star charts found on cave walls around Earth. During the trip, their condition is monitored by David, a human-like android played by Michael Fassbender. Upon waking from their long sleep, everyone seems to handle their return to a conscious state differently, with some getting nauseous and others jumping right into a fitness regimen in order to revive their muscles. This deep-space hibernation is a frequent element of science-fiction stories, including the original Alien, which premiered back in 1979.

How close we are: In February 2012, scientists were studying black bears’ ability to hibernate in a state resembling suspended animation, with an eye toward putting injured soldiers in stasis until they can receive emergency care. Researchers hoped to find a way to chemically replicate the bears’ ability to lower their bodies’ rate of metabolism, heart rate, and body temperature throughout the winter months. According to Fox News, the “hibernation genomics” research has received more than $2 million in funding so far from the U.S. Army Medical Research and Materiel Command, the National Institutes of Health, American Heart Association, and the National Science Foundation.

One of the more terrifying scenes in Prometheus features Elizabeth Shaw (Noomi Rapace) giving herself a makeshift Caesarian section with the help of an automated medical station. In the scene, she lies down in the pod, identifies what type of procedure she wants, and then watches as the machine opens her up, conducts the operation, and then staples her back together. It’s the sort of scene that manages to combine several different types of scares — in this case, claustrophobia, xenophobia, and tomophobia — in one squirm-inducing sequence.

How close we are: We haven’t abandoned the need for human surgeons, but we have come closer to a point when they don’t need to even be in the room to conduct a surgical operation. Recent innovations in robotics have produced machines like the Da Vinci surgical system and the Kymerax, which offer precise, mechanical tools that a surgeon operates remotely. These machines also feature helpful options like 3-D imaging and on-the-fly magnification of the surgical area — though they still require a living, breathing person to operate them.

While exploring the subterranean network of tunnels on LV-223, the crew of the Prometheus releases a set of small, automated drones that fly off into the cave and send back detailed topographical maps of the terrain and other assorted data. Using these “pups” (as they’re called by one of the characters), the team is able to generate a detailed, 3-D map of the entire region they’re exploring — something that offers some particularly enlightening information later in the film.

How closer we are: Researchers and hobbyists have been using aerial and underwater drones for a while now for various purposes, with some of the more advanced models able to repetitively bounce lasers, light, or sound waves off a surface in order to determine its topography. However, many of these drones are fairly large, and the amount of information they’re able to report back is usually proportional to their size, with the most thorough mapping systems requiring human operators. The most common, real-world mapping drones are also restricted to studying one direction at a time (usually the surface directly blow the craft), and not the 360-degree plane served by the Prometheus pups.

While the crew of Prometheus sleeps their way to LV-223, we see their android caretaker engaging in a number of different activities to pass the time, including movie-watching, hair-dying, and dream-watching. Yes, that’s right — while the team sleeps, David occasionally pops into the hibernation room to view whatever it is that they’re dreaming during their stasis-induced sleep.

How close we are: It might sound like a terrifically far-fetched idea, but we’re actually closer to this one than you think. Back in September, researchers at UC Berkeley revealed that they were able to record visual activity in the human brain and reproduce it via digital video clips. “We are opening a window into the movies in our minds,” said Professor Jack Gallant, the neuroscientist and coauthor of the research. While we’re still a ways off from recording our dreams and playing them back DVR-style, the ability for someone to peek at our subconscious is probably the least sci-fi technology on this list.

As with all of the Alien films, a very human-looking android plays a big role in Prometheus. Offering an opportunity for the audience to ponder the nature of life, humanity, and a number of other heavy philosophical subjects, David (Michael Fassbender) is a blend of cold logic and the perception of human traits by one who isn’t quite human. You’d also be forgiven for not realizing he was anything but human when you first encounter him.

How close we are: Where to even start with this one? Just this year, we’ve already seen robots used as prison guards, telepathically controlled robotic assistants, and a four-legged robotic pack mule that can carry more than dozens of humans. There’s been enough advancement in robotics over the last few years to merit a number of high-profile conferences organized to debate the best way to handle our evolving robot culture. (We recently held our own debate here on Digital Trends, in fact.) While we’re not quite to the point where we should be worried about a Skynet-like artificial intelligence deciding it was better off without us, we’re getting closer to the day when robots make our sandwiches.

How do you film what isn’t real? Joe Hunting on his documentary We Met in Virtual Reality

Be kind, rewind: How VHS shaped the way we watch movies

How Dune’s visual effects made an unfilmable epic possible

How The Matrix Resurrections used visual effects to plug in again