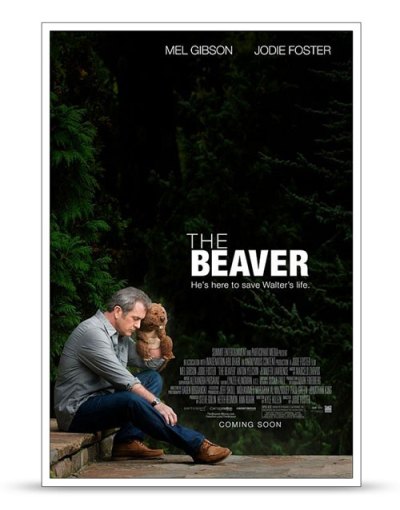 There is no easy way to put this, other than to say that The Beaver is a messed up film. It has its moments, but whether you love it or hate it, it is messed up. The majority of people interested in it will inevitably gravitate towards it because of Mel Gibson’s attempt at a comeback following his best efforts to alienate every single person alive (other than perhaps wealthy white men, whom Gibson seems ok with). And it is hard not to make the associations when you see him on screen, especially in this movie, where so many obvious parallels exist between the character seeking to redeem himself, and what would hope Gibson himself was feeling. But assuming you can get past that, Gibson turns in a solid performance. Ironically, for as big a risk as it was to cast Gibson, he is not the thing that stands out most in the film. In fact he is mostly forgotten under the weight of the bizarre script, and tempo change that happens so quickly you could get whip-lash from it.

There is a moment in The Beaver when you realize that the film you thought you were watching is actually something different altogether. Despite all the signs that it will happen, it still comes suddenly and is positively jarring. Once the movie begins down this new, and much darker path, it then tries to head back to a resolution that you originally had thought was coming, but by then it is far too late and most will be left wondering what just happened.

The film is being billed as a drama-comedy, a dramedy if you will, and it is.  For about half of the movie.  Then it becomes something different and far darker with a climax that is truly disturbing. It then changes once again into something else entirely. It is almost three films in one, and the disjointed feel can be a bit off-putting.

Mel Gibson is: The Beaver

When Walter Black enters the throes of a deep and clinical depression, he slowly begins to drift away from everything. His loving wife Meredith (Jodie Foster), his alienated son Porter (Anton Yelchin) and his youngest kid Henry (Riley Thomas Stewart) all are forced to watch the man they once knew simply fade away. Walter soon moves out at the request of his wife, checks into a hotel with his possessions and several bottles of alcohol, then proceeds to attempt to commit suicide.

He fails, of course, but wakes to discover that he is now under the care of a beaver puppet he had absent-mindedly slipped on his hand the night before. The Beaver, despite being a puppet (and speaking with an English accent), actually knows its stuff, and has a plan to help heal Walter. At first, things go well. Walter hands people cards explaining that the Beaver is part of an experimental psychological treatment, and people buy it. The Beaver is funny and kind, and helps to resurrect his relationship with his wife and youngest son, while his eldest refuses to have anything to do with it. Walter is also the CEO of a struggling toy company, and once the staff accept the Beaver, he helps them turn things around.

Meanwhile, Porter is doing everything he can to not be like his father. He has created a wall filled with characteristics of his Dad that he wants to avoid, and at school he is earning a good deal of cash by writing papers for students. Things are going well enough, when the beautiful valedictorian, Norah (Jennifer Lawrence), asks him to write her commencement speech.

So, up to this point, the film is actually a fairly traditional family dramedy. Sure, the beaver puppet is unusual, but he is good natured and the results are helping to heal a family tortured by clinical depression. Walter seems to slowly be getting it together through the Beaver, while Porter has his own fairly sweet subplot involving a romance with a girl that is harboring a secret tragedy of her own.

And Then Comes the Sucker Punch

It would almost be unfair to go into what happens next, but needless to say, the charming healing therapy of a guy wearing a puppet takes a dark and disturbing turn back towards reality. It turns out that Walter is somewhat insane, and the Beaver is an extension of that madness, and a problem. To say that the change is abrupt does not do it justice.

Over the course of about five minutes, the movie you were watching is replaced with something bordering on sinister. And it is not just the story of Walter and the beaver that goes cockeye, Porter’s love story also takes a depressing turn at exactly the same moment due to unrelated events.

From that point on the film is mired by the depression of the Black family. It is a sucker punch to those that bought into the dramedy angle that the film promoted itself as and had been building to up to that point. It also derails the film almost entirely. At the very least it feels like The Beaver skipped a track. Seeing a family ripped apart by depression is not the easiest of topics to embrace to begin with, but to dangle an almost whimsical plot before hitting you with a right cross of a twist is an interesting idea, but one that sucks any enjoyment you may have had right out of the film. It is jarring and leaves you wondering what happened.

But more than just the sudden shift in story, the pacing also changes drastically. One minute Walter is rebuilding his life piece by piece, Porter is beginning a relationship with a beautiful and talented girl, and the story is moving along at a brisk pace. Then over the course of three or four scenes spanning ten minutes, the movie comes to a crawl. Very little happens as the various family members wallow in their predicaments. Then things get worse as the plot takes yet another horrific twist that takes the film in yet another direction, with yet another tone that is closer in feeling to the first part of the movie, but by then it is far too late.

The Beaver is like three movies in one. Unfortunately none of them are fleshed out enough to be great, and the rapid shift in pace and tone is more jarring than enjoyable.

But How is Mel?

The plot of The Beaver is going to be of secondary concern to most audience members and people interested in the film. This movie is a carnival, and Mel Gibson is the main attraction. Gibson actually does a decent job in the film that is not coincidentally about a man trying to get his life back, and you can almost forget the man and see the character, for the most part.

But it is also hard not to make any associations or see any more to the production company’s name that flashes across the start of the movie, “Imagenation Abu Dhabi”. It is absolutely unfair to read too much into this, even though Gibson, who first began his downward spiral with anti-sematic remarks, is being financed by a company located in the United Arab Emirates, a country that made headlines in 2009 for refusing entry of Israeli tennis player Shahar Pe’er to play in the Dubai Tennis Championships. Again, maybe that isn’t fair, but when the name “Abu Dhabi” flashes across the screen before the movie begins, it is hard to stop your brain from making at least some associations, and be reminded of Gibson’s off-screen issues.

Jodie Foster in her position as director of The Beaver obviously saw a role that her friend could take on to help his own public image. Despite the details, the path of Walter Black is one of a man that is deeply depressed and trying to get back to where he once was. He wants to make things right, but doesn’t know how. He is eventually humbled and accepts that he has some issues to work through. The parallels are impossible not to see if you know even a little of Gibson’s recent antics.

He does a good job and proves again that he really is a good at his job, but it won’t be nearly enough to win back fans he lost. He is still a talented actor, but it will take more than a weird and disjointed movie directed by his friend and long-time collaborator to redeem him in the eyes of the public.

Strangely, for all the focus of Gibson, Anton Yelchin actually turns in what is perhaps a more memorable performance as the alienated son trying to have his own life out of the shadow of his father. It isn’t nearly as meaty as Gibson’s role, but Yelchin comes off as far more likable and entertaining. A chunk of the credit for that has to go to Foster’s direction, but Yelchin also has the potential for stardom.

If you can overlook the man, Gibson does a solid job of portraying a broken man that is seeking a form of redemption. Foster also has a good visual eye and got the most out of the cast. Of all the actors–Gibson and Foster included–it is really Yelchin that steals the show. His story is interesting and you want to root for him. He holds his own against some legendary acting talent, but like the rest of the cast, his character is ultimately defined by a plot that shifts the tone, and drags the pacing through bizarre changes that take you right out of the movie.

If The Beaver had stuck with one of the many themes it attempted, either a comedy, a drama, or a weird quasi-suspense film, it may have been a success. But instead it is simply too disjointed of a movie to really succeed as a whole.

Gibson will be the focus of the film, but ultimately he pales in comparison to the bizarre plot and pacing, that will have people scratching their heads wonder what just happened.

Clerks III review, or how Kevin Smith made me cry
See How They Run review: a charming but slight whodunit
Cyberpunk: Edgerunners review: Candy-coated chrome carnage
The Whale review: Brendan Fraser can’t save this histrionic drama
FuboTV: channels, price, plans, packages, and add-ons
House of Darkness’ Neil LaBute on revitalizing the Dracula myth with his latest movie
Your guide to K-pop group Le Sserafim’s exciting Antifragile comeback
The Amazing Spider-Man at 10: Was Andrew Garfield the best Spidey of them all?
Best Latino shows on Netflix (September 2022)
Death is a way of life in The Midnight Club trailer
The 10 most popular movies on Netflix right now
James Cameron on pushing the boundaries of what’s possible in Avatar and Super/Natural
Heardle today, September 21: Answer, hints and help for song of the day (Wednesday)