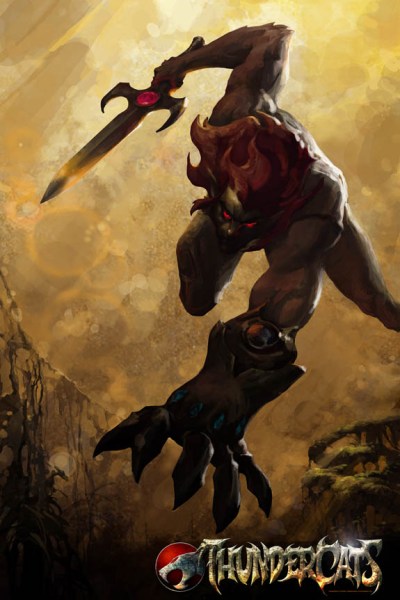 Most children of the 80s will forever carry with them the iconic, yell of “Thundercats, Thundercats, Thundercats, HOOOOOO!” It is like a tattoo on your memories that will never fade or be erased. But now a new generation will have the chance to roll with Lion-O, Cheetara, and Snark, as the Cartoon Network has commissioned a new series of Thundercats to debut in 2011.

The original show followed a group of humanoid cat-like people from Thndera as they escaped the destruction of their planet at the hands of the evil Mumm-Ra, leader of the Mutants from Plun-Darr. An accident caused the Thundereans to crash, and a mishap with the suspended animation gave Lion-O, the protector of the mystic Sword of Omens, the body of an adult while retaining the mind of a child. But in a cool way, not in a “Of Mice and Men” way. Then the mutants attacked and good fought evil.

Yeah, ok, the plot was a bit trite, and the child in a man’s body is creepy even if it was supposed to be endearing, but Thundercats was a classic show that echoes through the nostalgic recesses of the brains of anyone that grew up in the 80s, and its return might be very cool.

The series is also notable as it will be co-produced by Japan’s STUDIO4°C, marking the first time that Warner Bros. will produce an anime series.

In the press release sent out, WB states that “The new ‘ThunderCats’ will appeal to viewers who have loved the characters all their lives as well as young newcomers to the franchise. A sweeping tale combining swords and science and boasting ferocious battles with the highest of stakes, the grand origin story of Prince Lion-O’s ascension to the throne – and of those who would thwart his destiny at any cost – takes on epic dimensions in this sharp new telling. As the forces of good and evil battle each other in the quest for the fabled Stones of Power, Lion-O and his champions learn valuable lessons of loyalty, honor and mortality in every episode.”

Check out the first new artwork above and let us know what you think.

The best Netflix original series right now (September 2022)
Batman: Caped Crusader can recapture the spirit of the DC Animated Universe
Diego Luna’s Cassian rebels in new Andor preview scene
Bye-bye, Batman: Caped Crusader. Animated series is no longer on HBO Max
FuboTV: channels, price, plans, packages, and add-ons
House of Darkness’ Neil LaBute on revitalizing the Dracula myth with his latest movie
Your guide to K-pop group Le Sserafim’s exciting Antifragile comeback
The Amazing Spider-Man at 10: Was Andrew Garfield the best Spidey of them all?
Best Latino shows on Netflix (September 2022)
Death is a way of life in The Midnight Club trailer
The 10 most popular movies on Netflix right now
James Cameron on pushing the boundaries of what’s possible in Avatar and Super/Natural
Heardle today, September 21: Answer, hints and help for song of the day (Wednesday)