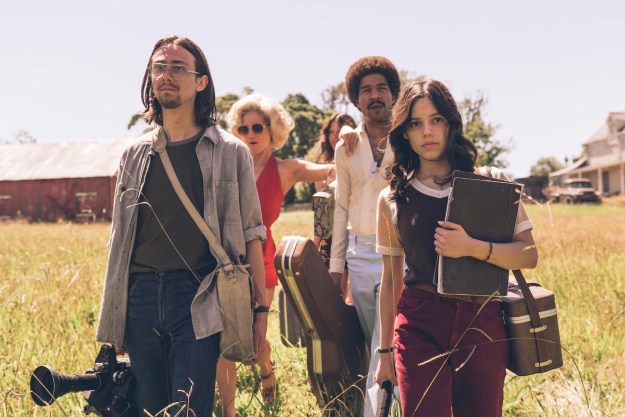 X, from arthouse distributor A24, is a slasher movie about what really horrifies us. Writer/director Ti West (The House of the Devil) is too intelligent and thoughtful a filmmaker to believe that conventional boogeymen top our list of fears. He knows that a youth-obsessed society is far more terrified not only of growing old, but of confronting the fact that the elderly may still possess some very inconvenient desires.

True to form, the farm is isolated and creepy, and the group’s first interaction with the ancient proprietor (Stephen Ure), Howard, comes at the business end of a shotgun. Howard makes it clear that he disapproves of any youthful shenanigans on his property (and that’s well before he realizes what they are actually up to). He claims he wants to protect his elderly wife, Pearl, from any shocks. But just who needs protection — and from whom — quickly grows complicated.

Everything, in other words, screams for the group to get the hell out of there. But X wouldn’t be in the tradition of slasher films like Friday the 13th or The Texas Chain Saw Massacre (the film pays homage to both) if the characters had sense enough to not walk into situations that clearly spell their downfall. And yet, these aren’t the typical dumb, helpless twentysomethings common to the genre. On the contrary, they are capable and intelligent. But West wants to show that despite their physical superiority over the, ahem, monsters on the loose, the visitors are nevertheless doomed by their ignorance and inexperience, underestimating the threats on the farm until it’s too late. It never even occurs to them to consider what some people might still want — or be capable of.

A movie about making movies

West has worked in horror for a long time and he is in full command of both the genre tropes and his craft. His camera is fluid but not showy, and he finds the right muted colors and textures to convey the grain of ’70s film stock without making the movie look like a carefully curated Instagram account. He has said that he wanted to make a more “highbrow” slasher pic, and it’s hard to argue that he hasn’t succeeded.

The movie opens with, then later repeats, a shot from inside a barn that invokes Charles Laughton’s Night of the Hunter, in which Robert Mitchum terrorizes a family on a farm. There are also at least one verbal and two visual references to Psycho. West follows an early scene in which a character mentions the French New Wave by staging a grizzly homage to the famous traffic accident sequence in Jean-Luc Godard’s Weekend. A shot of Maxine running away from the farmhouse is straight out of Terrence Malick’s ’70s classic, Days of Heaven. Cinephiles and breathless film students will surely spot many more references over repeated screenings.

Thankfully, the allusions are carefully integrated and resonate thematically with the films they invoke. West has made cinema that engages in intelligent dialogue with other cinema — a far cry from the glaring in-universe references in, say, Star Wars and Marvel movies that perform fan service but typically have no grander purpose.

Given all that, is the movie too highbrow for its genre? Does West’s insistence on interrogating the relationship between cinema and youthful beauty compromise some of the suspense? Maybe a little bit. The middle act could be tighter. And the final “twist” bludgeons the viewer with its irony. It’s an unnecessary reveal that is too on the nose compared to the subtlety of what’s come before it.

Overall, though, X is a movie that works well even for those who haven’t had a few semesters of film studies. The cast is charismatic. There are moments of visual wit, such as when the film cuts from a passionate kiss to a cow chewing cud. And the final third of the picture delivers all the gore and shocks demanded of the genre. Still, in the tradition of A24 arthouse horror such as Hereditary, Midsommar, and The Witch, the movie puts ideas in the foreground as much as it does bloodshed. West knows that slasher and porn films are less about violence and sex, respectively, and more about the shock and titillation of social transgression. With X, he has made a movie in which the most unsettling moments compel the viewer to question what society really considers taboo and why.