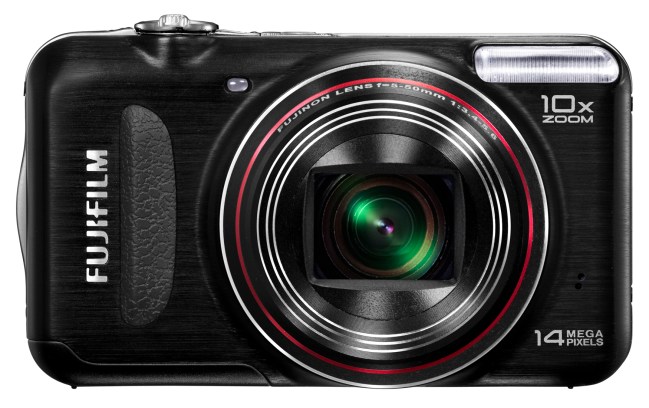 On Monday, Fujifilm announced its new T-series compact cameras as well as various renovations to its current line, at CES 2011 in Las Vegas. The developer has introduced new features like geo-tracking and improved flash capabilities to its popular manual and point-and-shoot devices, but it’s major update are two entirely new additions.

The T-Series will premiere two compact cameras this spring, the T200 (at right) and the T300 (above). Fujifilm claims that both will include impressive zoom capabilities and come in sleek, 18.5-mm bodies. Each have 14-megapixel sensors and have the standard array of Fujifilm features, like dual image stabilization, face detection, face recognition, intelligent flash, HD filming functions, and smile detection.

Fujifilm will also be updating its active camera line, its X-series. The XP20 and XP30 will both feature 14-megapixel CCD sensors with 5X optical zoom, and 2.7 inch high res LCDs with anti-reflective coating. More importantly for rough and tumble types, the cameras will be waterproof up to 16.5 feet, shockproof up to five feet, and freezeproof at 10 degrees Celsius. And of course, both are dust proof. The only difference in the two will be the geo-tracking and GPS tagging feature installed in the XP30. The XP 20 is due in late March for $199.95 and the XP30 in mid February for $229.95.

Best Cyber Monday Deals 2022: Laptops, TVs, AirPods, and more
This Polaroid-style Fujifilm instant camera is $49 for Cyber Monday
Mavic 3 design change reduces the drone’s price
Best GoPro alternative action camera deals for October 2022
How to remove the background from an image
Instagram boss says to expect even more video content
6 awesome Earth images captured from the ISS in July
This GoPro Hero 10 bundle is $100 off at Best Buy today
The best iPhone tripods for 2022
Watch this Mavic 3 drone soar above the world’s highest mountain
How to watch DJI unveil an all-new drone today
DJI Avata vs. DJI FPV: Which first-person drone is best for you?
Astronaut reveals source of ‘intriguing’ bright light on Earth