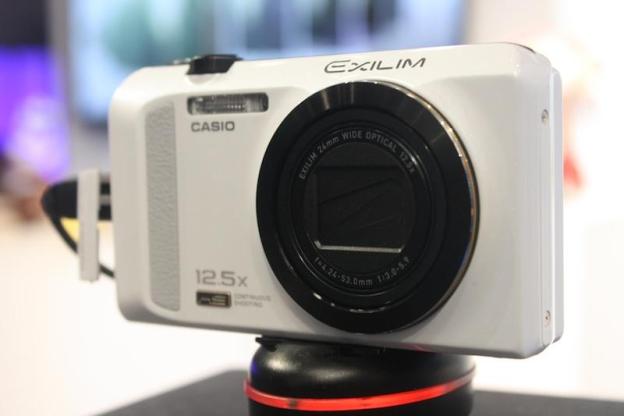 We had two reactions to Casio’s releases last year: We were underwhelmed by the Tryx and happily surprised by its high speed EX-ZR100. Luckily for us, the aforementioned natural disasters prevented Casio from making any announcements about a next-gen Tryx or even further plugging the camera (there’s been a serious inventory issue). We were told that the camera has done well for Casio, despite any skepticism on our part (we just couldn’t understand Casio throwing its full marketing weight behind a camera best known for its self-picture taking ease) and that it will definitely remain part of the brand’s future release plans.

But on to the more serious cameras. Casio also announced the EX-ZR200 (at top), and the EX-ZR15. Following in the vein of the its point-and-shoot lineup, the cameras focus on speed above all else, as well as ease of use and portability. The ZR200 has gotten a small aesthetic makeover, and feels slightly smaller and with a sturdier construction. But the biggest upgrade is, of course, its speed: it takes 0.98 seconds to start up and has a 0.13 seconds auto focus. It captures images at 0.27 seconds between photos. We also appreciate the addition of the blurred background effect, a new effect we’re seeing more and more point and shoots including. Key specs:

The ZR15 is a serious simplification of the ZR200. It has a much sleeker, minimalist look without the front-facing grip. It’s an auto-heavy device and definitely targeting entry-level consumers, and is nearly as fast as the ZR200. It features the same background blur effect and super wide-angle shooting. It has the prerequisite art effects and scene pre-sets, but it’s easily the camera’s shutter and processing speed that gives it a little something to hold over other point and shoots at this level. It’s arguably a feature that most consumers shopping in this segment should be looking for. Key specs:

Casio gets lost in the shuffle of the pocket cam market, and its inventory and manufacturing problems this year–as well as bowing out of its press conference–don’t help matters. But high-speed shutter, AF, and image processing aren’t made as much of a priority for a lot of its competition, so it’s a feature worth focusing on.