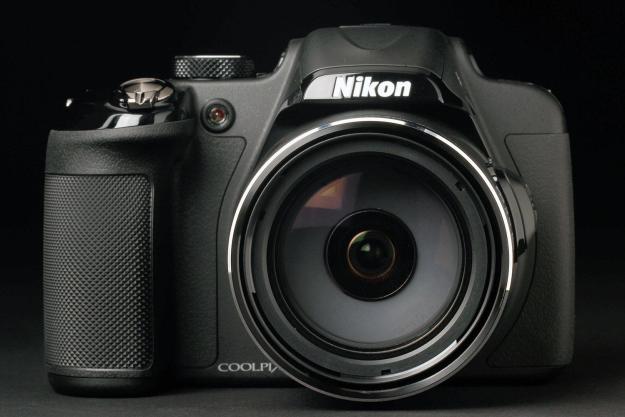 “The Nikon Coolpix P600 is a decent mega-zoom but it definitely has some issues that stops us from recommending it.”

Just in time for summer traveling, Nikon introduced one of the most “mega” of mega-zooms available. The 16.1-megapixel Coolpix P600 ($500) has a whopping 60x optical zoom with a mind-boggling focal range of 24-1,440mm, the most powerful telephoto available. The Panasonic Lumix FZ70 and Samsung WB2200F also are blessed with 60x zooms, but theirs start off at 20mm, ending up at “only” 1,200mm. Now, let’s find out if the P600 has the chops to capture some crisp shots of hummingbirds 1,000 yards away!

The beauty of mega-zooms, with their fixed, wide focal ranges packed into a convenient-sized body, is that they are well suited as vacation companions or every-day walking-around cameras. The P600 mimics most other mega-zoom bridge cameras, meaning it looks like a mini-DSLR, only in this instance you can’t change lenses. And why on Earth would you need to swap out glass, when you have a lens with a nice wide-angle opening for landscapes and that hummingbird-catching telephoto? And unlike interchangeable lens cameras with large lenses, the P600 weighs slightly less than 20 ounces, including the battery and card. The dimensions are 5 x 3.4 x 4.2 inches when it’s turned off and the lens is retracted, but when the lens is fully extended, it’s about 7 inches deep. Regardless whether it’s on or off, you won’t be putting this in your back pocket.

The 24-1,440mm range is breathtaking and you’ll most likely go zoom crazy.

The camera has a nicely textured, deep grip that keeps your fingers solidly in place – something quite important when you’re shooting extreme telephoto images. It feels comfortable, but, as we always say, you really need to do your own hands-on before you buy.

The 60x Nikkor Super ED lens has an aperture range of f/3.3-6.5. With an f/6.5 aperture rating for telephoto, don’t expect this to be a great spy-cam at night; it’s for shooting faraway subjects on a nice sunny day. We’ll talk more about performance in a bit, but the 24-1,440mm range is breathtaking and you’ll most likely go zoom crazy, just as we did. Like many mega-zooms, the Coolpix has two zoom controls – one surrounding the shutter button and a second on the side of the lens barrel. Near the lens is the AF Assist lamp that helps with autofocus in low light.

On the top-deck are stereo mics for the Full HD videos, the pop-up flash, main mode dial, power on/off and Function keys, as well as the shutter/zoom toggle on the grip. The Function key is customizable and we set it to ISO, as that’s a setting we accessed frequently.

The rear has many of the usual key controls, as well as two critical features – an electronic viewfinder (EVF) with a diopter control and a vari-angle LCD screen. The fixed-position 0.5-inch EVF, unfortunately, is not very good, with a rating of only 201K dots – it feels small and dim. This is a major negative since you’ll need to use it for many super telephoto shots. It also doesn’t have an eye sensor so you have to tap the “Monitor” button to the right of it in order to switch between the EVF and the LCD – a definite disappointment. One of our favorite mega-zooms is the older but still available 12.1-megapixel 50x Canon PowerShot SX50 HS; its EVF is the same spec but it’s brighter overall. In comparison, the Coolpix has some advantages such as a higher-resolution sensor, better movie mode, and larger, higher quality 3-inch vari-angle LCD rated 921K dots (the Canon has a 2.8-inch twisting screen with 461K dots). We really like vari-angle displays since you can hold the camera in different positions for some unusual perspectives. The Nikon’s screen even held up under direct sunshine once we cranked the brightness to the max.

On the right side is a compartment with a rather flimsy hinge covering the USB and HDMI connections. The battery is rated a good 330 shots, so you should have no problems shooting all day before a recharge. The battery charges in camera, so get used to plugging it whenever you can to avoid purchasing a spare.

You’ll find the P600, battery, AC adapter, USB cable, strap, and a short string for the lens cap. You also get a quick-start guide. The full manual is available as an online download, as is the ViewNX 2 software for handling images. Like many other manufacturers, Nikon no longer supplies CDs with many of its cameras.

The P600 has a 16.1-megapixel, 1/ 2.3-inch CMOS sensor, so we ratcheted down our expectations accordingly. The most important feature for this camera is its mega zoom, so that was a key testing point. We set the camera to maximum resolution for stills and video before hitting the streets. In this case it’s 4608 x 3456 pixels JPEG Fine (no RAW option) and Full HD 1920 x 1080 30p/60i MOV files. The main mode dial has the usual settings: Smart Auto, PASM, U (custom), Scene (18 options), Special Effects, and three dedicated scene settings.

We alluded to hummingbirds earlier and not surprisingly, the P600 has a specific scene mode for birders, folks who really need a 1,440mm telephoto. When you choose this option, the camera immediately zooms to the 800mm setting when you hit the OK button. We’re not members of the Audubon Society but it helps frame faraway subjects, feathered or not.

Before getting into output specifics we’ll briefly discuss what it’s like using the P600. Simply put, it’s a mixed bag. The lack of an eye sensor on the EVF is a serious drawback. Yes, we know it costs money to do so but it would really add to the photographic experience. And it’s not just this Nikon – we had the 60x Samsung WB2200F with us, and it too requires a button press to switch between views. Even more of a bummer, we had to press the Monitor button several times to make the switch. There’s another issue as well: The P600 use contrast detection AF and if you don’t have a sharp edge or high-contrast subject, the lens will constantly grab, looking to lock focus. Are these two flaws deal breakers? Not quite, but just be prepared to deal with them if you purchase this camera.

On a much more positive note, the P600 takes some seriously good photographs. We traveled to a park with a huge fountain. It was great going from wide angle to zooming into the base of the fountain. There were no issues with focus, as it was a nice sunny day and there were plenty of hard edges for the AF system to grab. When we shot videos of the rising water, color quality was good but the camera simply couldn’t handle the moving water against a blue sky background and it took a few seconds before it locked into the hard lines of the base.

We may knock some aspects of the P600 but we have to give props to the lens-shift Vibration Reduction system.

When you take photos of static subjects, such as a statue at a veterans’ memorial, the results are top notch. Same holds true for cacti on a mountainside. It’s loads of fun starting off at wide-angle, then zooming to fine details, whether it’s carving on a statue or flowers on top of a saguaro cactus. Just as we enjoyed the 50x Canon SX50, we went zoom crazy with the 60x P600.

One of the biggest mega-zoom issues is keeping the subject within the frame, especially if you’re hand-holding the camera in extreme telephoto. One of the features we really liked in the Canon SX50 was the Framing Assist Seek/Lock that helps frame your target when you’re in nosebleed telephoto territory. The slightest movement will have you searching for your target again and again. With Framing Assist, the zoom pulls back to more easily re-capture the subject, then zooms in again with another touch. We loved this, and Nikon has a similar feature buried in the manual called Snap-back Zoom. Enable it, flick the lens-barrel toggle, and you can grab your subject much more quickly. It wasn’t as smooth as the Canon but it was helpful, nonetheless.

We have to take Nikon to task for its frames per second (fps) spec – at 7 fps it seems quite competitive. Problem is, you have to shoot with Normal compression rather than Fine. Use the higher-quality mode and it slows down dramatically to about 3 fps. In either compression, the camera basically stops after the burst of about seven frames and you have to wait as it saves images to the card. This mega-zoom may look like a DSLR but performance isn’t in the same league. Don’t expect it to capture your kids downfield chasing a soccer ball. Static subject matter is the order of the day with this one, as is shooting in bright light. We may knock some aspects of the P600 but we have to give props to the lens-shift Vibration Reduction system. We used walls and railings to prop the camera whenever possible but primarily used a firm grip when hand-holding the P600. The VR system helped grab some super sharp images, even at maximum telephoto. Even so, a monopod would be a great accessory for this camera –and any other mega-zoom.

Since this is a compact digicam with a tiny chip, we weren’t expecting “sensitivity” miracles. Although the camera has an ISO range of 100-6,400, definitely keep it at the lower end of the scale. It’s solid to 400, then noise is much more noticeable at 800 and quality drops as you move higher. It isn’t an absolute disaster at 6,400 but there are speckles aplenty, so avoid it at all costs. The camera lets you set maximum ISO ranges (400 and 800) so keep it at the lowest setting to avoid disappointment.

The P600 captures Full HD videos with stereo sound using the MOV format. We shot our clips in 1080/60i and other than the focusing issues mentioned earlier, you’ll be happy with the results.

Nikon was reluctant to fully embrace Wi-Fi, forcing consumers to buy an adapter. Fortunately they’ve gotten with the program and are adding wireless to most of their digicams and newer DSLRs. To use it, we had to download the Wireless Mobile Utility (sexy name, right?) app to our Droid 4; an iOS version is also available. The instructions were a bit confusing in the manual but with a few taps, we were connected. The app lets you download images from the camera and use your phone as a controller. This is about as basic as it gets; we hope Nikon spends some resources on its app division so it won’t fall even farther behind leaders Samsung and Sony. Bottom line, it worked.

We never did get those hummingbirds, but we did get a number of solid photos. Overall, the Coolpix P600 is a decent mega-zoom but it definitely has some issues that we don’t want to beat to death. Although we love that 1,440mm setting, at $499, it’s hard to fully recommend. If you don’t mind losing some focal length, check out the compact Coolpix S9700.