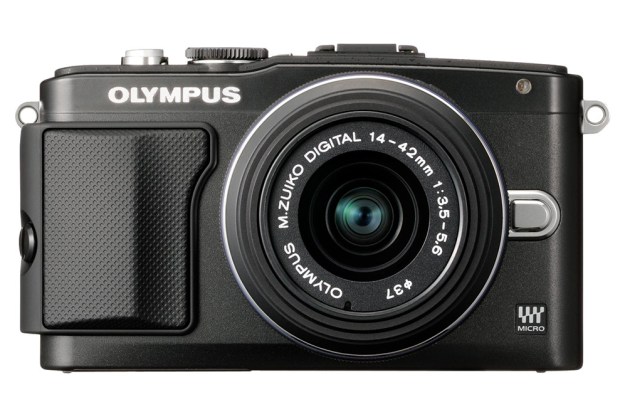 “For users upgrading from a simple point-and-shoot to an interchangeable lens camera, the Olympus PEN Lite E-PL5 is a very good camera to transition to.”

For users upgrading from a simple point-and-shoot to an interchangeable lens camera, the Olympus PEN Lite E-PL5 is a very good model to transition to. Out of the box, the E-PL5 takes great photos. It does take time, however, to learn some of the features of the camera, for which there are plenty.

Lots of settings and a deep menu mean there’s much to explore with the camera, but users entering the ILC category for the first time will discover new ways to shoot with this Micro Four Thirds variant. Compared to a few other cameras in the MFT category, the E-PL5 offers a lot of features for a decent price of $699 with a 14-42mm kit lens ($650 for body alone), although it isn’t the most affordable mirrorless camera you can buy.

The E-PL5 has a simple design that doesn’t vary a whole lot from other cameras in the PEN series; while it doesn’t have as much of a retro styling as the E-P3, the similar classic cues are noticeable. But the fact that it’s a slimmed-down mirrorless camera that offers many of the benefits of a larger DSLR is a welcome feature – just don’t expect it to work exactly like a DSLR. If you’ve ever lugged around a cumbersome camera on your most recent vacations and outings, you will immediately appreciate the E-PL5’s smaller size and lighter weight. The camera weighs in at less than 16 ounces, so it’s much easier to tote. But its Live MOS sensor is larger than a typical point-and-shoot, allowing it to capture better image quality (although smaller than that of a compact DSLR or mirrorless offerings from Sony and Canon). As an interchangeable lens camera, you have a selection of Micro Four Thirds lenses – from macro to super-telephoto – to choose from, which enhances the types of photos you can shoot while retaining a user experience not unlike a point-and-shoot camera.

Like high-end luxury cars with features that eventually trickle down to affordable models, the E-PM2 has some of the features found in the more expensive but excellent O-MD E-M5, such as the sensor and autofocusing system (but not the 5-axis image stabilization). The feature set in the E-PL5 is comparable to other cameras in its class, including Olympus’ PEN Mini E-PM2. Don’t be surprised if you do a double take: the E-PL5 and the E-PM2 are nearly identical in looks and features. Both cameras have the same 16-megapixel Live MOS Micro Four Thirds sensor; TruePic VI image processor; 200-25,600 ISO; 1/4000-to-60-second shutter speed; 1080i high-def video recording, 460k dot 3-inch touchscreen LCD; creative filters; dust reduction system; in-body image stabilization; and burst shooting of up to 8 frames per second. Neither camera has a built-in flash; instead, Olympus includes a small, detachable flash that slips into the hot shoe. There’s no viewfinder, just live view through the LCD.

What the E-PL5 has that the E-PM2 doesn’t is a tilting LCD (up to 170 degrees), a mode dial, a larger grip that comes off the camera body if you want to shave a few grams, and a few more function buttons. If you can live without those extras, save yourself $100 and go with the E-PM2. We like the tilting LCD as it lets you get a better vantage by aiming the camera and adjusting the screen so you can see when you’re shooting with the camera high and low. It also lets you see yourself when taking self-portraits if you flip the screen up to the full amount. The angled screen is also useful for reviewing photos or showing photos to friends on the camera. We were sold on this feature, but ask yourself, is it essential if you are on a budget? Both displays are touch sensitive and responsive, which makes navigating through menus, selecting items, or playing back photos easy. On the E-PM2, however, some of the screen real estate is eaten up by the menu options.

The E-PL5 uses Olympus’ FAST (Frequency Acceleration Sensor Technology) AF System to autofocus quickly by assigning 35 separate focus points within the field of a picture. It also has face and eye detection, so it can identify the subject and make sure it’s focused on a person, rather than another object in the photo. If it’s the object you want, you can use manual focus to get the picture right.

Contents were the same for both cameras. Both come with with some standard goods such as the strap, lithium-ion battery, battery charger, and cables. The cameras we tested came with a M.ZUIKO Digital 14-42mm f3.5-5.6 II R kit lens. An external flash that attaches to the hot shoe was also included.

… make sure your bag will accommodate the large-size lens

The lens is versatile for day-to-day shooting, but it is on the big side. The reason is that, unlike other zoom lenses that retract in and out, this kit lens stays physically extended. While the camera is still highly portable, the lens does make the camera a little bulky after a while.

Olympus includes a little bag to carry the flash. That is the only “carry” accessory. The camera doesn’t have any kind of case to carry the camera, which isn’t typically included with cameras anyway. We just mention it because you’ll want to shop for a good bag when you purchase your E-PL5, just for safekeeping. And make sure your bag will accommodate the large-size lens, if you stick with the 14-42mm lens.

When we turned on the camera and began to play with it we noticed some of the strengths right away. We used the automatic and semi-automatic settings as most users of this camera would. A few casual images snapped around the house with natural light appeared much brighter than similar shots taken with our DSLR that’s a few years old. As Olympus claims, we found the autofocusing to be relatively fast. This camera typically doesn’t exhibit any large lags between shots, except in the case of low light and using special effects. Video performance was smooth and stayed in focus and sound quality was also good, but the camera’s strength lies more in still photos.

While the camera performs well in low-light settings, it does need light, obviously. We braved the cold to take a picture of the full moon over a lake in near darkness; besides the light emanating from the moon, there was light from the window behind us. The camera wasn’t able to get a decent photo of the moon. A better shot would have required a tripod and some well-chosen manual settings.

In other low-light pictures, in the warmth of indoors, we were able to get very clear shots that appeared in crisp focus. However, the photos took on the reds and oranges of the available light, which affected the coloring of the photos. We didn’t see too much noise in most of the shots.

If you can live without the extra features …you can save a few dollars and go with the Pen Mini E-PM2.

Both cameras offer art filters that add effects like sepia, black and white, polarization, and the soft lighting used in portraits. These effects are widely available in photo editing software, but the camera lets you snap pictures with the effect in use. It’s fun to play with. It will come in handy when you see the perfect photo that you want to apply a grainy black and white effect or a sepia brown filter over the photo. These effects will be familiar with users migrating from simple point-and-shoots, but more advanced users will probably eschew their usefulness.

Both cameras performed well and gave us crisp, focused photos. We were finding it difficult to justify the $100 to spring for the E-PL5 over the E-PM2. But then we started tilting the screen out to review photos or framing the best angle for a shot, and it became a “must have” feature. We also like the settings dial, which is styled more like a DSLR camera; the E-PM2 functions more like more like a point-and-shoot cameras; that means a few extra steps to change from full auto to manual or art effects.

Both cameras are good entries into the Micro Four Thirds category, and will serve new users well. The picture quality and ability to play with a number of settings make it a good choice for photographers who like to tweak shots and play around with different ISO and other settings. If you can live without the extra features, such as a tilting screen and settings dial, you can save a few dollars and go with the Pen Mini E-PM2. Our preference, if you’re going for this price point and feature set, is to spring for the extra features offered with E-PL5.

Topics
The DJI Osmo Action 3 looks nothing like the Action 2
GoPro Hero 11 Black leak suggests a moderate upgrade
The best iPhone tripods for 2022
Netflix sheds light on its ‘approved cameras’ for filmmakers
How to remove the background from an image
Instagram boss says to expect even more video content
6 awesome Earth images captured from the ISS in July
This GoPro Hero 10 bundle is $100 off at Best Buy today
Watch this Mavic 3 drone soar above the world’s highest mountain
How to watch DJI unveil an all-new drone today
DJI Avata vs. DJI FPV: Which first-person drone is best for you?
Astronaut reveals source of ‘intriguing’ bright light on Earth
Astronaut’s video offers rare fish-eye view from the ISS